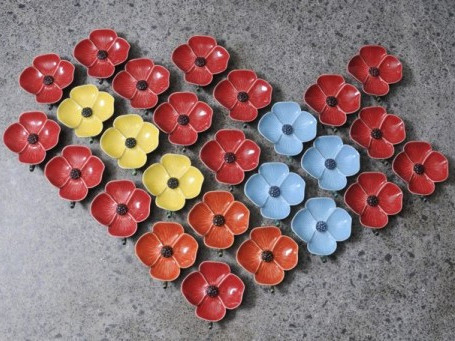 A lasting symbol of Anzac Day has emerged in a collaboration between the Auckland Memorial War Museum and Steiner Ceramics. These specially designed ceramic red poppies are for sale through the museum store with part of the proceeds going to the Royal NZ RSA.

Inspired by the poem In Flanders Fields, the red poppy has become the emblem of Anzac day. The poppies bloomed across some of the worst battlefields of Flanders in World War I and have come to represent the immeasurable sacrifice made by men and women who died in World War I and later conflicts, including the Gallipoli campaign of 1915. To purchase the poppy contact the Auckland War Memorial Museum Shop at [email protected].

For the first time, Resene ColorShops will have poppy pins available so you can make your donation in store. Or you can make donations via text or online. TXT POPPY to 4462 for an automatic $3 donation or visit www.rsa.org.nz. The street appeal runs from today, April 17 to next Friday, April 25. Texts and online donations will be accepted until April 30.