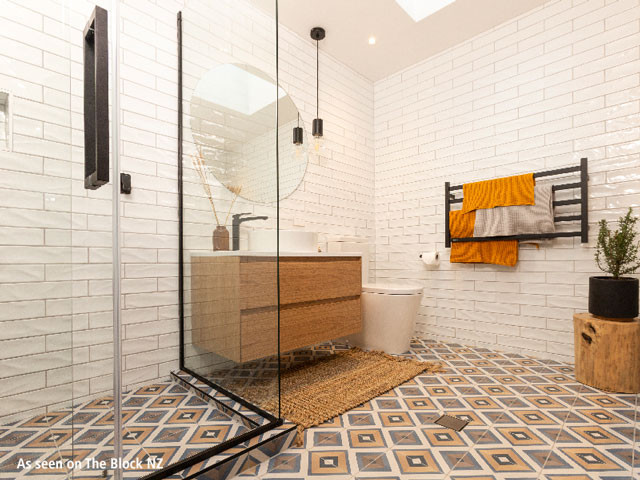 Three’s The Block NZ recap: battle of the bathrooms

No rest for the wicked as the teams were tossed straight into the hot, deep water of bathroom week, in week two of The Block NZ. After the steep learning curve of the guest bedroom challenge, this time the teams were tasked with selecting their own brief for their room design – but it had to include a tile selected by the judges, in addition to shelves made by the teams themselves. 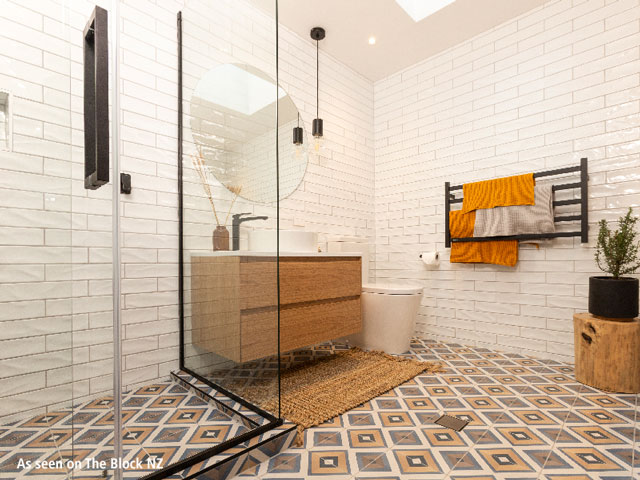 Team Gizzy, now in the coveted house four, took out the win for the second week in a row with their “Mix and Match” themed bathroom. Not only that, they scored a perfect 10 from both judges, with judge Jason even saying it was the best bathroom he’d seen on the The Block NZ.

The judges loved Amy and Stu’s use of pattern, the use of Resene Alabaster on the ceiling and the texture in the room, making some risky choices but absolutely nailing them.

The use of the penny round tiles given to them by the judges, behind the bath, was superb and they loved how they contrasted the look with grey grout. The floor tiles were also a highlight, described as a very bold choice that paid off.

Judge Kristina said the accessorising was top notch and felt the colour tones of the oak vanity, and the mustard towels gave the room a really earthy tone.

Jason loved the generous size of the shower as well as the sliding door and said the black tapware was on the money.

Overall, the execution was to a really professional standard. 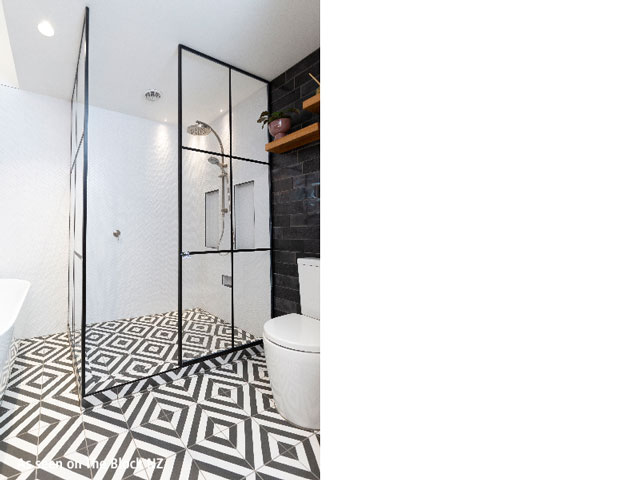 The judges’ first impression was “wow” and they particularly liked the amazing use of the tile given to them by the judges as a feature floor tile – described as a very bold move that they pulled off well.

To complement the bold use of a herringbone tile in the shower and the black and white floor tiles, Chlo and Em opted for Resene Alabaster on their bathroom ceiling.

Kristina thought the wood shelving helped warm up the room. Jason loved the choice of shower, saying it was striking with a good, generous size. He also loved the faceted basin which was very on point with the brief.

Both judges liked the layout of the room, especially the decision to hide the toilet away from the door, and the position of the skylight.

Overall, the judges were impressed with the quality finishing, but they felt it needed more colour. 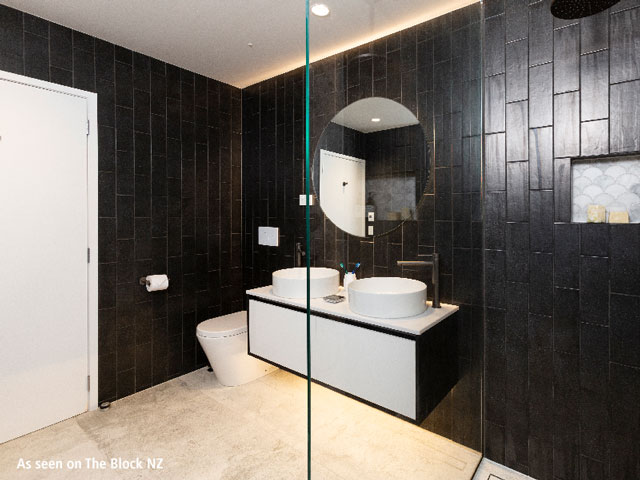 The judges were impressed by Ben and Tom’s decision to change the location of the bathroom door, saying it was a clever idea to gain more space in the room.

Kristina and Jason were also happy to see their chosen tile used “all out” as a feature wall. They also liked that the bath was positioned under the skylight but felt the choice of bath was a little small.

Jason loved the gunmetal colour tapware, calling it beautiful and sophisticated. He also commended the size of the shower.

Kristina loved the floor tiles, stating that they gave an industrial edge to the space.

To set off the dark tiles on the walls, Ben and Tom opted for Resene Half Alabaster on the bathroom door and Resene Half Sea Fog on the ceiling.

Overall, the judges said the layout was great, the finishing was pretty good, and it was a nice spacious family bathroom. 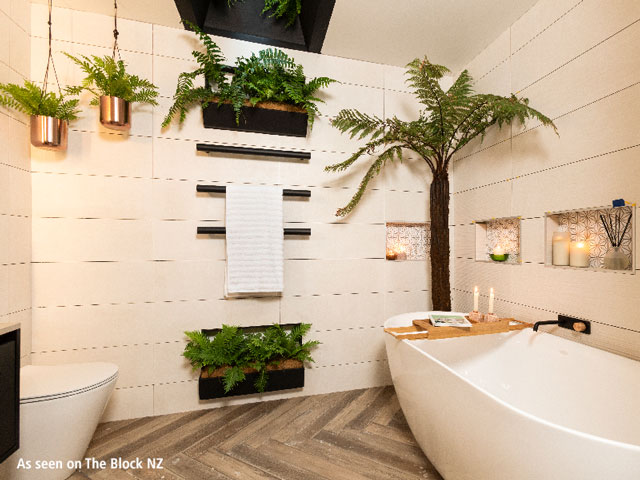 It was a tough week for Claire and Agni who didn’t manage to finish their bathroom. Upon entering the bathroom, the judges wondered if they’d walked on to the set of the film Avatar.

They didn’t like the way the feature tile given to them by the judges had been hidden away in the recessed shelves, with Kristina saying she would have liked to see it on the whole wall. The judges also felt there were far too many recessed shelves.

Claire and Agni painted their ceiling in Resene Double Alabaster to accentuate the green of all the plants they added to their bathroom to meet their vibrant, green New Zealand brief. They also added some extra drama to the space with accents of Resene Black on the planter boxes and in the skylight cavity.

Overall, the brief was vibrant green, but the judges noted that if all the plants were removed from the bathroom it would just be a beige space.