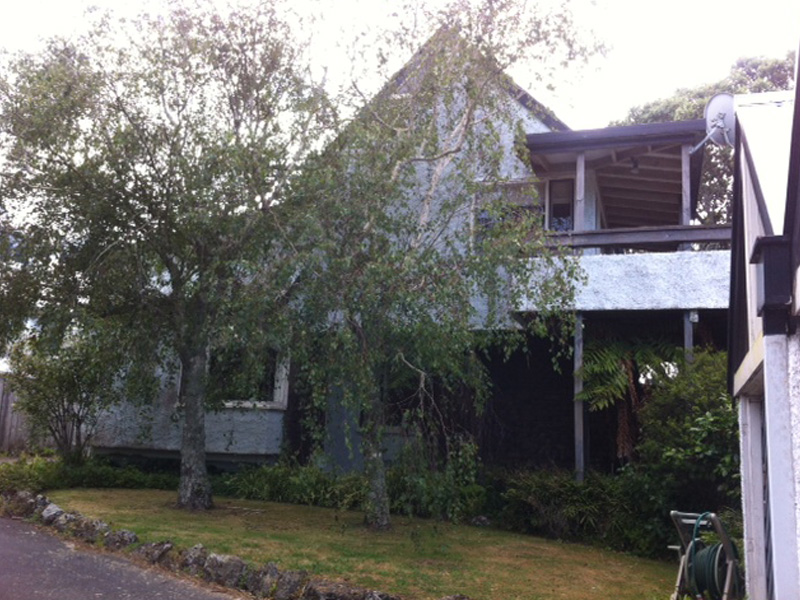 Faced with a house that looks like something from Hobbiton, it soon became obvious that we would have to forego its fading retro charms and opt for a more contemporary look. The shape of the house as seen from the street annoyed Ian no end. He hated its ‘witch’s hat’ gable and weird over-sized lean-to at the side.

The forecourt at the front of the house may be handy but it’s an ugly sea of tarmac with the front door apologetically lurking at the back of it. And just a couple of metres from the house’s northern wall is a huge, ancient, protected pohutukawa tree.

The property still had its original garage, parked on the side boundary near the back. It had been augmented at some stage by a double garage at the front so was only used as storage. Facing north, it would be perfect converted into extra living space, and joined up to the main house.

With the design, we went around in circles a bit – should we almost demolish the whole thing and go boxy and sharply modern? Or should we try for something more classic-looking? We knew we wanted to reclad the house in weatherboards to get away from ‘plaster paranoia’. It’s not a leaky home but the rebuild was a chance to start again with fresh materials.

We chatted to our architect friends and one, Dave Simiona, came up with what would be a truly pivotal part of our new home. He suggested a floor plan that swapped the front door from one side of the house to the other. That way, you walk up towards the huge pohutukawa, turning it into a feature instead of just a big tree plonked in the back garden. It also means that the front door neatly separates the house into the private areas (bedrooms) on one side, and the public areas (living) on the other. Genius.

And after some time, we came up with how the house would look from the street. By adding a wide band around the double-storey end gable, and taking it across the front of the lean-to to hide it, the house now looks to us like a contemporary Kiwi house with a profile that reminds us of rural structures, and the types of simple gabled homes found in Ian’s hometown, Christchurch. 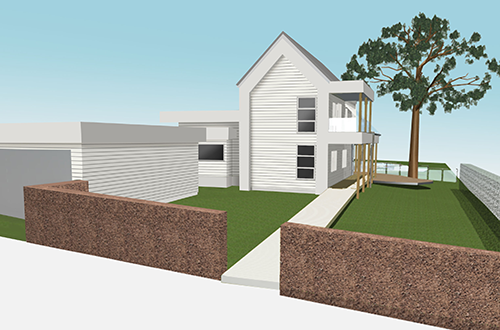 We had been toying with using black paint on the weatherboards but Dave wisely pointed out that if we went dark, we would have to use the more expensive weatherboards instead of pine to cope with the heat build-up… even if you do use the ingenious Resene CoolColour paint technology. He also suggested that a crisp modern look of white-on-white would be more timeless and would give a nautical feel (we’re close to the coast). Perhaps a silvery white like Resene Sea Fog.

What do you think? Let me know at [email protected].

Next Diary of a renovation: colours

Read more Diary of a renovation: the beginning

Sharon Newey is editor of habitat magazine and habitat by Resene, and is a serial renovator and paint lover. Catch her renovation blog every fortnight, right here at www.habitatbyresene.com.