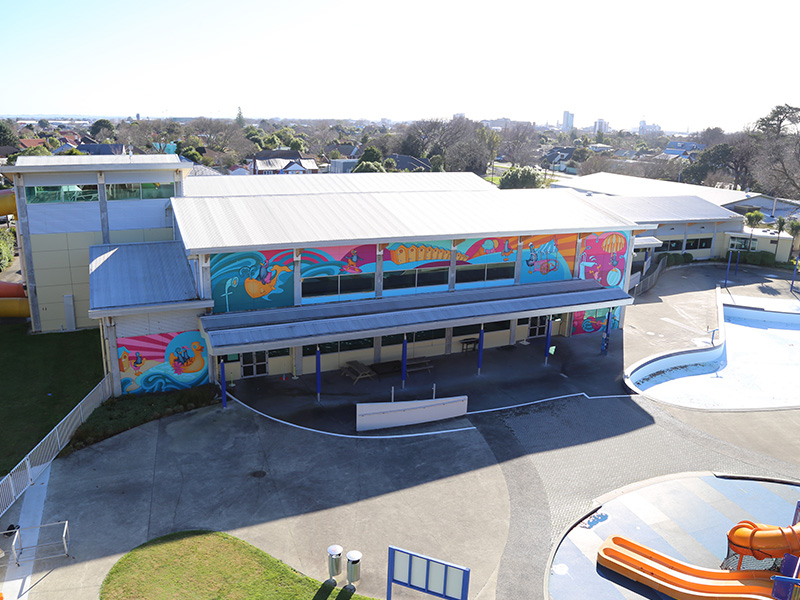 The Lido Aquatic Centre gets a colourful lift

When Palmerston North’s primary aquatic centre, The Lido Aquatic Centre, was due for replacement of the exterior building cladding system, the Palmerston North City Council and local artist Melanie Christmas (also known as Mel Xmas) saw its architectural renewal as an opportunity to give a fresh new face to The Lido and create added value to such an important project.

Initially, Mel was engaged to design and paint a 70m2  section of the façade while the scaffolding was still in place from recent re-cladding work.

“Having built a strong repertoire of work across the city with playful characters on buildings, in carparks, and downtown laneways, Mel’s vibrant artwork seemed like a natural fit. Mel’s bold murals showcase how powerful Resene’s range of colours can be.,” says Dave Chamley, who works for Palmerston North City Council.

“The project grew to include a further four areas across the interior and exterior of the aquatic centre, changing walls and buildings that were once barely noticed into features in themselves.”

“The project started with one large exterior wall and escalated from there. The brief was a loose aquatic theme and I was really fortunate to be given free reign over most of the design elements,” says Mel.

“The initial exterior wall was undergoing maintenance and with scaffolding already in place, it was an opportune time to add a bit of spice. The design set the stage with characters which eventually flowed on to subsequent walls.” 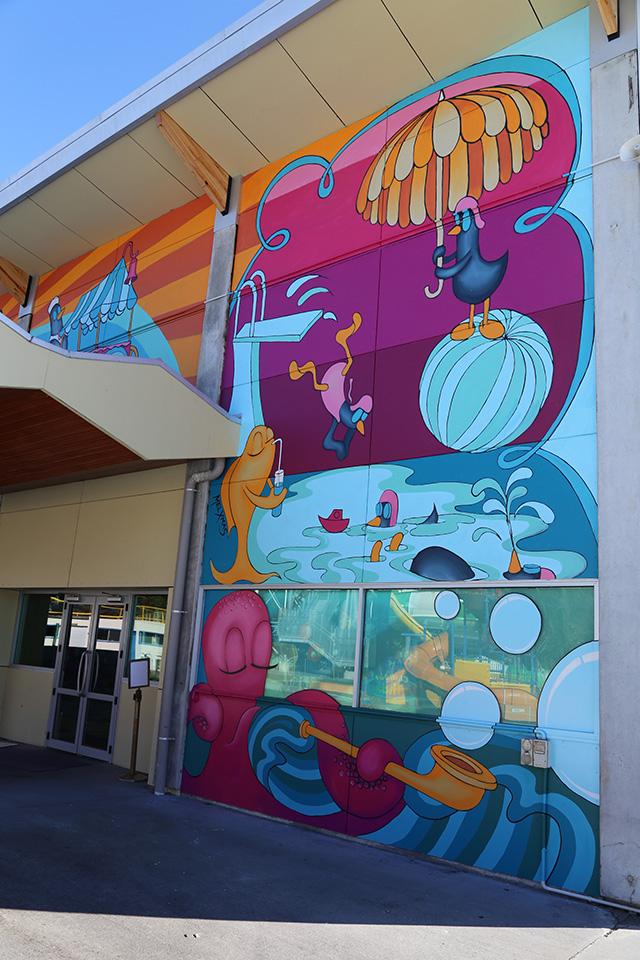 Following on from the first wall was the spa pool area, additional aquatic themed characters were created – this time, in a beach setting and a new colour scheme to tie in with the existing interior of the building.

“The toddler pool was the next area. It was already painted in a dark blue with a large orange overhead duct, so a continuation of oranges and blues seemed like the obvious choice,” explains Mel.

“The final wall was a challenge with the surface being in stucco and various other obstacles such as plants, windows, vents, wind and rain. While painting the stucco with a brush and roller proved to be quite a challenge, the joy of doing blends with Resene Lumbersider on a rough surface quickly made up for the munted paintbrushes.”

Lynden Noakes, the Lido Aquatic Centre Facility Manager, says that the impact that Mel’s work has had on the facility has been great. “There are so many different and vibrant colours that really bring a fun and excitement element to the facility. Mel has used some great Resene colours within her murals and the facility has had so many positive comments from young and old!

“If we could, we would let Mel loose on the whole facility! She is very talented in what she does and has manged to tie her artwork in will with the aquatic theme, by using the many colours that Resene paint has to offer.”

“The temptation in an aquatic facility was to go overboard with blues,” adds Mel, “but there were various other elements to consider such as existing exposed timber beams, overhead ducts painted orange and yellow, and an existing penguin theme running throughout the building. Resene Lumbersider was the obvious choice for the external walls to bear the brunt of Manawatu weather, the vibrant range of pink and orange hues were an easy choice with a great selection available from Resene.

“The mural slightly overlapped an existing window about 1000mm from the ground, so a topcoat of Resene Uracryl was used on top of the Resene Lumbersider in this area to ensure it would be scratchproof. The interior walls around the spa and toddler pool were done with Resene SpaceCote. It was my first time working with Resene SpaceCote, and I found it to blend just as easily as Resene Lumbersider while not being affected at all by humidity in the spa area.

“This was my first time painting on stucco which proved to be a challenge for my cartoonish style, especially the dark outlining, but the outcome was well worth the extra time it took!” 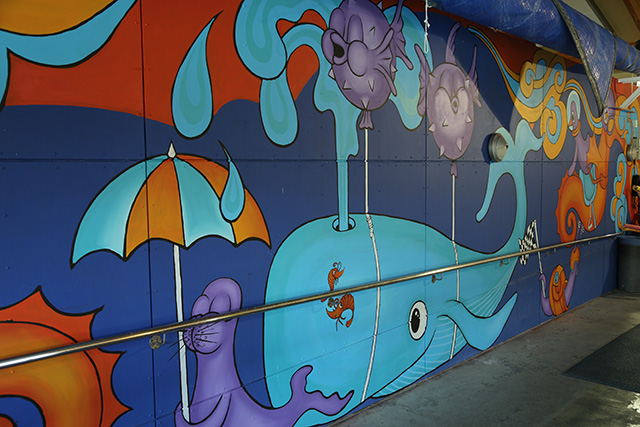