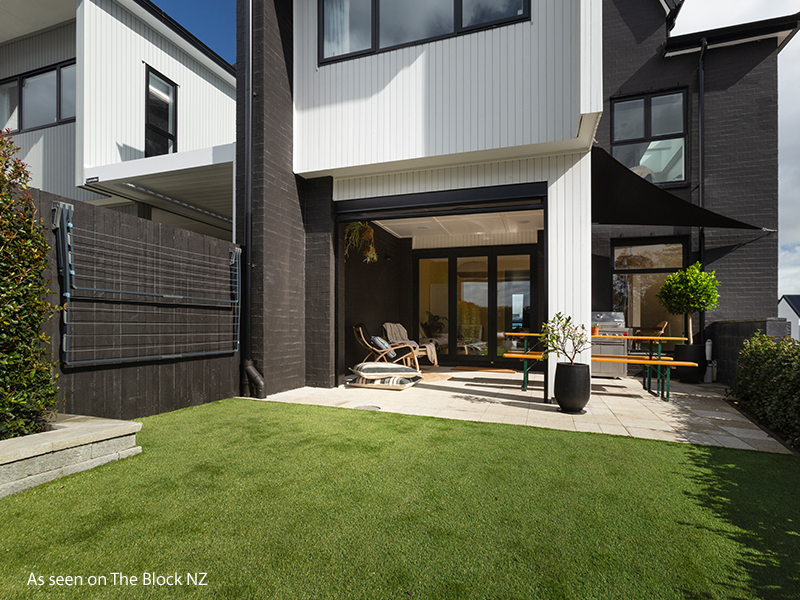 Amy and Stu's overall win came after a run of victories during the season. They also won the People's Choice award, taking home a brand new Suzuki S-Cross Prestige.

We take a look back at the last challenge for the team – the house exteriors and outdoors. 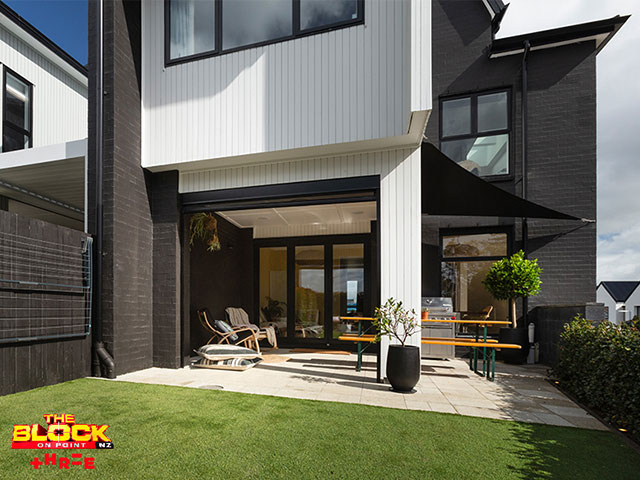 The judges were impressed Amy and Stu worked well with a difficult asymmetric space. They said the outdoor living area was beautifully styled and the established planting framed the outdoor space beautifully creating instant privacy.

Judge Jason Bonham said that having the low hedge running along the road frontage meant that the view of the park across the road was nicely brought into the scheme.

Fellow judge Kristina Rapley was a big fan of the seating nook at the end of the lawn. She said it was beautifully dressed and a lovely spot to relax in. She was glad to see a pull-down screen added to the patio area for weather protection.

Jason said the garden lighting was nicely chosen and not overdone. And he liked how the keystone pavers added detail along the fence which tied in nicely with the stepped gardens down to the footpath. He said this would create real street appeal once the lower garden had matured.

Overall, the judges said it was a really lovely space, super sunny, super functional and great for entertaining. The exterior of the house was painted in a contrasting scheme of Resene Bokara Grey and Resene Half Sea Fog. 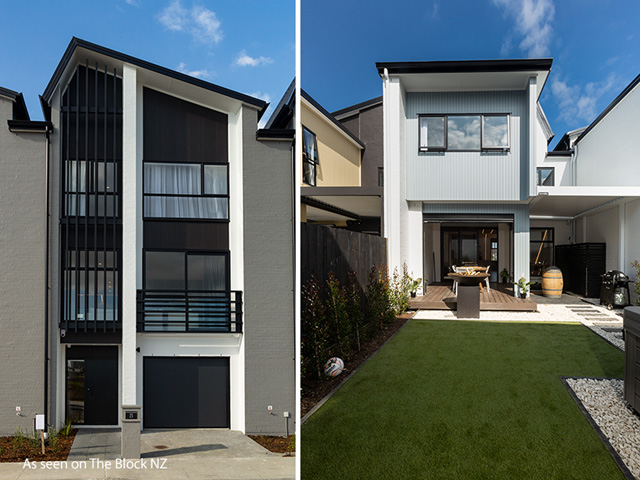 The judges’ first impression was that this was a luxurious, executive outdoor space. They said the team stayed true to their style and the whole outdoor space was geared for entertaining with a barbecue area for eating/drinking, the spa for relaxing, a Louvretec roof and pull-down screens to make it a useable space year-round.

The judges thought the artificial grass was a good choice as it made the area very low-maintenance. The planting choices make the garden easy to manage and they said once the plants matured, it would nicely break-up the big white wall.

Jason said it was nice to see some outdoor lighting and it would be a gorgeous seating area at night. Kristina was a big fan of the outdoor fire, as these were trending for outdoor spaces right now.

Overall, the judges said the team did an amazing job creating a super functional, low-maintenance space which could be used to entertain all year round. The rear exterior is finished in Resene Half Sea Fog. 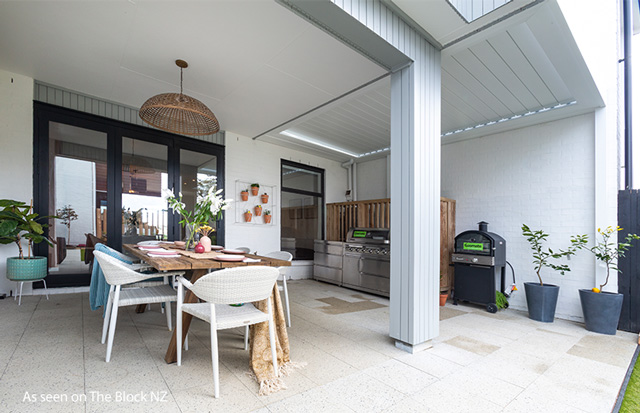 The judges liked the nice big open space, mentioning that extending the paving area made the whole space feel very generous, which was good, because it housed an epic-sized barbecue great for entertaining, along with the pizza oven.

Kristina said the herbs and lemon tree provided little clues that this was an outdoor cooking/dining area. She liked the crimson plants in the back corner as it added a lovely pop of colour to the space.

Jason said it was good to see a washing line included and also liked the featured tree in the corner of the yard. The judges said the team had done a great job with the table setting as it made the whole space feel inviting.

Overall, they said it was a calming, open space which was clean and tidy and well presented. The team used Resene Half Sea Fog in this area. 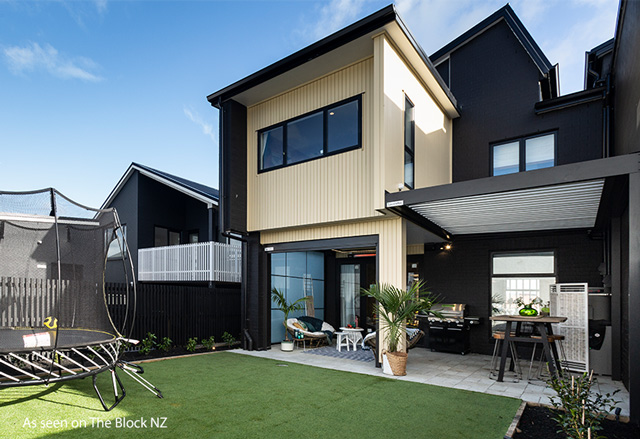 The judges’ first impression was that it was nice to see a playful use of colour with a rug, cushions and throws. Kristina was glad to see the team had pulled their styling back a bit and the trampoline was a nice, fun element that young families would love.

They felt that continuing the paved patio across the back of the house was a good idea as it made the space feel bigger and the bar leaner was also a good choice.

The Louvretec roof made it a very versatile space for entertaining all year round.

Overall, the judges said it was a very generous sized, family friendly space that was nicely staged. They said it was super low-maintenance and would appeal to buyers.

The exterior is finished in a combination of Resene Bokara Grey and Resene Canterbury Clay.

Catch up on any The Block NZ episodes you missed On Demand here.