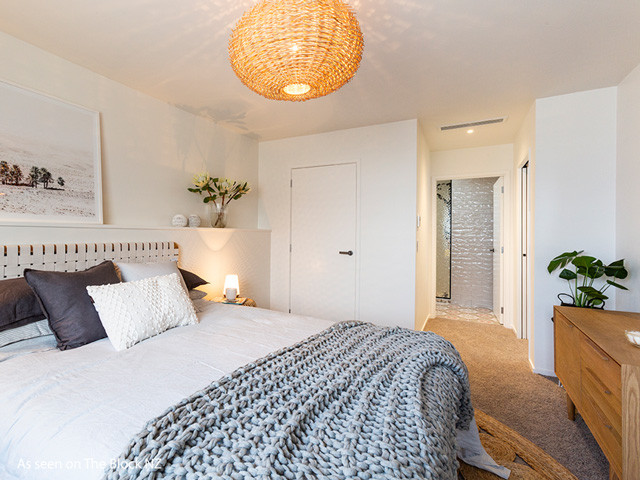 Last Sunday on The Block NZ, the master bedrooms and ensuites were revealed, one of the most important rooms in the competition – no pressure, teams! While it was fresh and neutral for House 2 and 4, the other two teams went for rich Resene colours for their walls, which earned high praise from the judges. Here are the rooms. 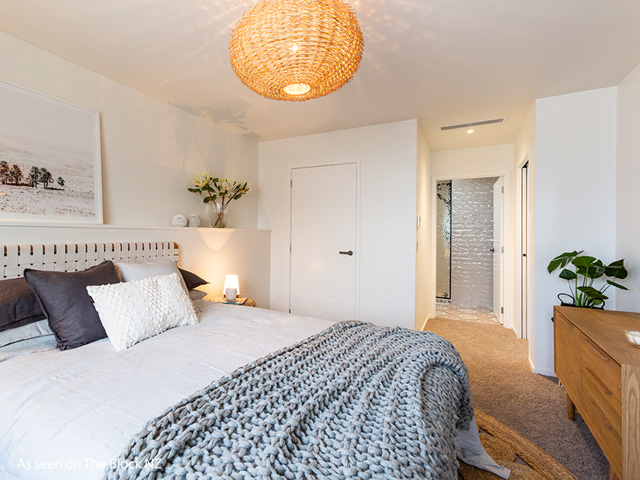 Amy and Stu are known for going for bolder colours on their wall, but they surprised us with a calming, fresh bedroom painted in Resene Rice Cake… which the judges thought was genius.

The mustard coloured drapes made the space very dramatic and judge Jason Bonham really liked the choice of headboard for the bed. Both Jason and fellow judge Kristina Rapley thought the shelf above the bed was a great idea.

The room felt perfectly balanced, even with a mix of materials and mismatched bedside tables and lamps. 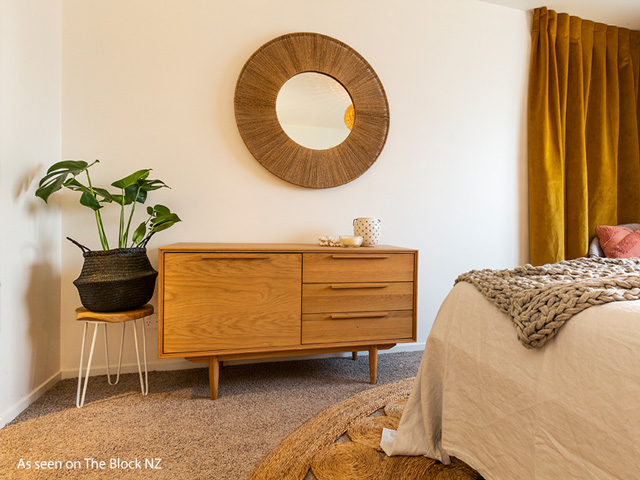 The walk-in wardrobe was spacious, and the judges were seriously impressed with the bag that Amy made and how they incorporated the difficult fabric given.

As for the ensuite, the judges first impression was: “Another absolutely fantastic bathroom.” They loved the textured shower glass as it gives privacy and reflects the light. 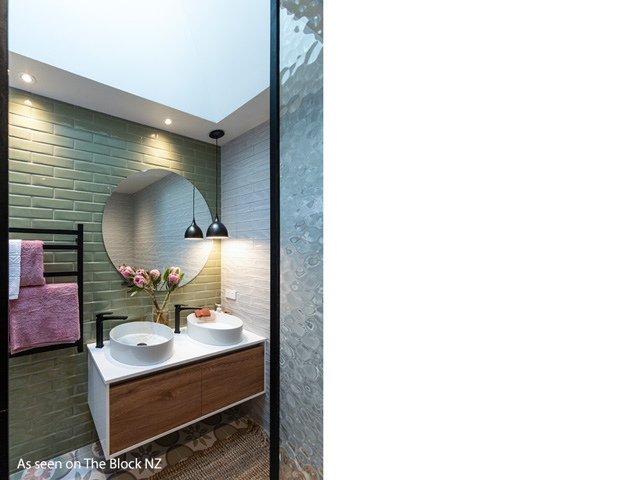 The floor tiles were a beautiful brave choice and the sage coloured subway tiles were stunning. Kristina loved the choice of vanity and Jason said it was hard to fault the ensuite.

Overall, the two spaces really complemented each other, and the judges were super impressed once again. 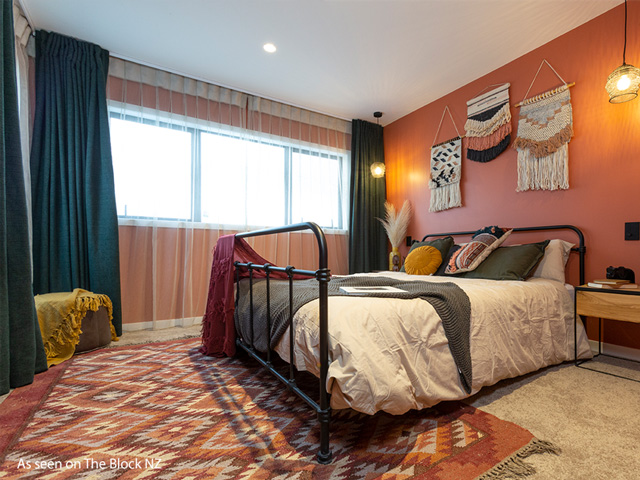 With walls painted in Resene Crail, the judges commended Claire and Agni for choosing a colour that was bang on trend and added a gorgeous richness to the room. It also worked well with the dark coloured drapes.

Jason was impressed by the walk-in wardrobe but thought painting the hallway white made it feel longer, which in turn made the master bedroom feel smaller.

The first impression of the ensuite was that the floor tiles were great but felt disconnected to the master bedroom. 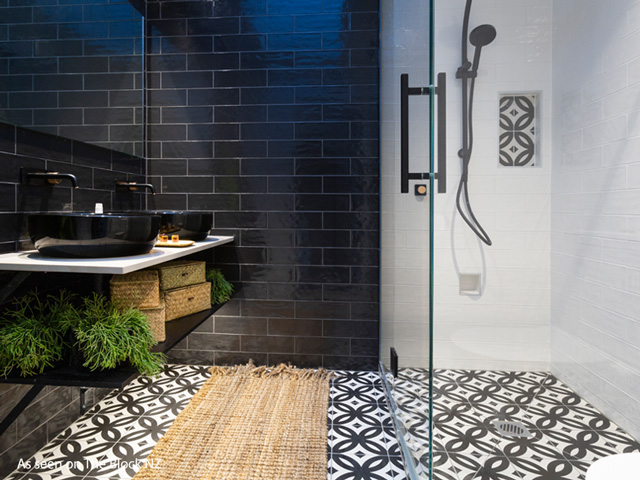 Kristina liked the choice of tapware and the open vanity. Jason said the finishing in the bathroom was almost there.

Overall, the judges thought the spaces weren’t bad, it just felt like too much going on in both areas and it lacked a little cohesion. Less is more. When they first walked into Ben and Tom’s master bedroom Jason and Kristina’s first impression was "another overly masculine space with no colour", painted in Resene Half Sea Fog. Kristina, however, was impressed with the cushion the boys made out of the fabric given. Unfortunately, the boys were let down by their incomplete rooms. 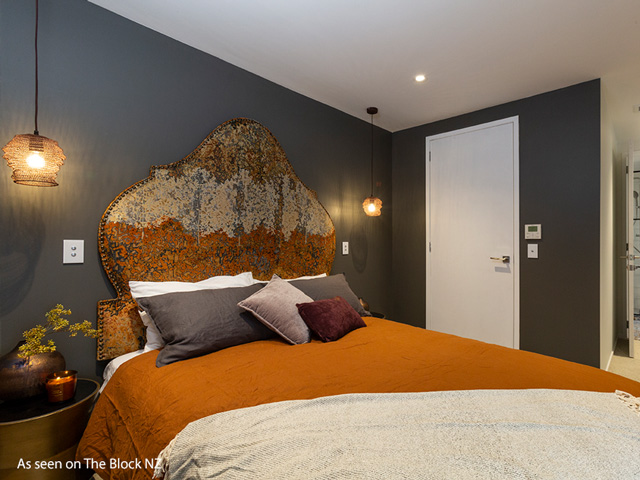 Chlo and Em were praised for their fantastic use of colour, going moody with Resene Dune on the walls. It’s a lovely deep stable hue which makes everything else in the room pop. They successfully created a Moroccan vibe with mustard coloured linen and bespoke bedhead.

Jason thought there was some good materiality with the metal and velvet in the room.

The judges loved the walk-in wardrobe. It was very spacious with loads of hanging space which will be a big selling point.

The girls did a great job with the fabric given which worked well with the Moroccan theme. 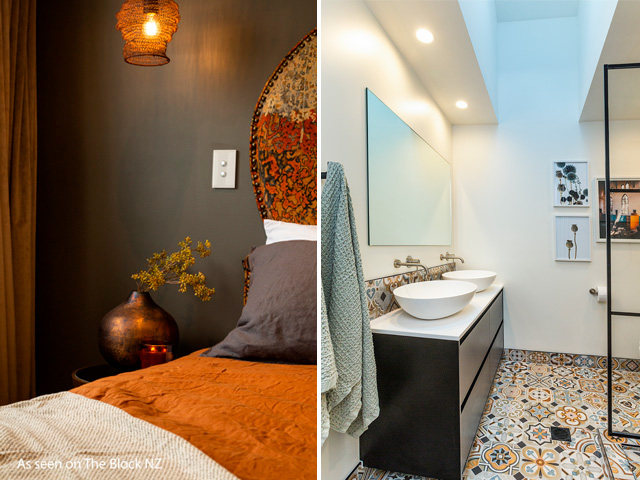 In the bathroom, the statement floor tiles were a beautiful and bold choice. They complemented the lovely glazed earthy wall tiles really well.

Overall, it was a job well done. The execution was to a professional standard, and the bedroom and ensuite really worked well together with the Moroccan theme.