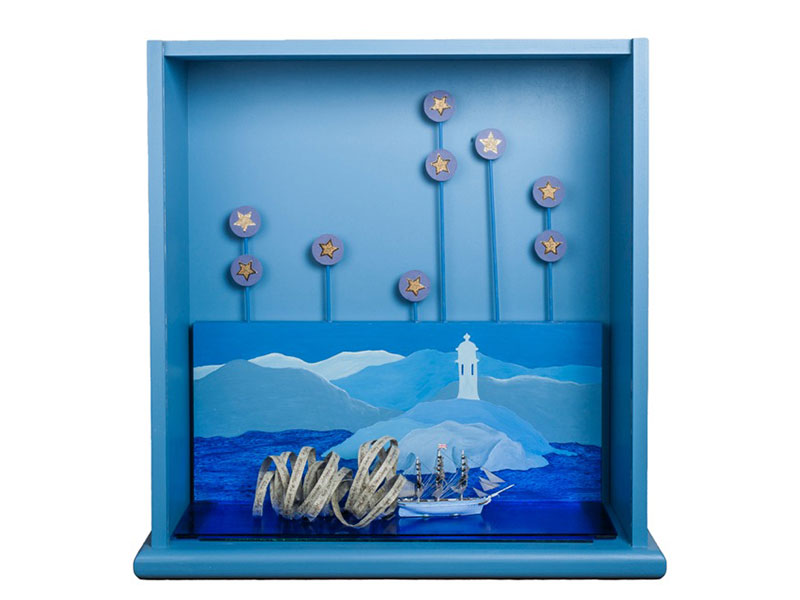 A fascination with the rituals and sculpture of American native peoples inspired Palmerston North artist Sue Artner’s interest in creating art in the form of shrines.

Ten of her works are currently being featured in Shrines of Remembrance and Essence, a new exhibition at K?piti Coast’s district gallery, Mahara.

“Shrines of Essence and Remembrance uses the concept of a sacred place within which individuals or ideas are venerated to tell stories in a colourful and imaginative way,” says Gallery Director Janet Bayly.

Sue Artner lives and works as an artist and teacher in Palmerston North. But she is originally from the small town of Corinth in the southern US state of Mississippi.

“Since childhood, I’ve been intrigued with sculptural creations of cultures expressing spiritual concerns and the dream world,” says Susan. “As a child in the late 1940s/early 1950s, I witnessed native Alaskan and Southwest Indian rituals and was also riveted by the sculptural objects of indigenous peoples on display at the Smithsonian Museum in Washington D.C.”

Susan began making assemblage work in her first sculpture class at Texas Womans’ University in the 1960s. Her thesis exhibition in 1967 involved constructions of wood, found objects, ceramic, fabrics, and casts in latex and fibreglass to create ‘fantasy furniture’.

“By then I had seen New York artist William Accorsi’s toy sculpture, Marisol Escobar’s figurative assemblages as well as other 60s artists combining materials from the heritage of Schwitters, Bauhaus experiments and Dada.”

“The shrine projects began in early 2000, and the works that are in the Mahara Gallery have come from that period.”

Susan walks us through her inspiration for three of her works featured in the exhibition.

Navigator’s Shrine to the Benevolence of Oro’s Rainbow 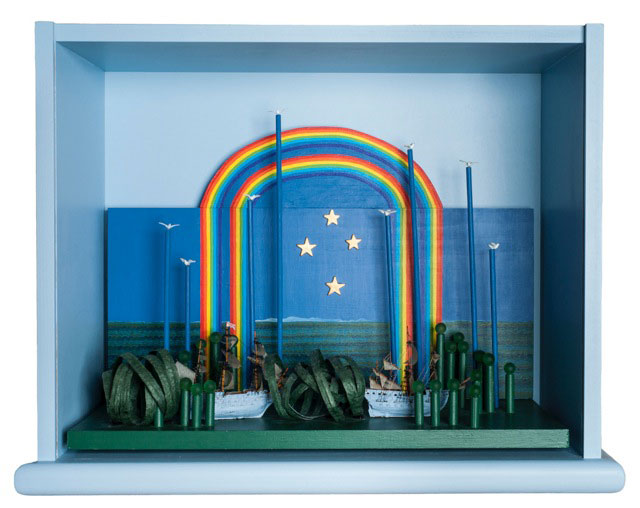 For this piece, Susan says, “the initial idea sprang from the Alaskan grave spirit houses of the Athapaskans. I was greatly charmed by the idea of visiting a cheerful doll’s house to remember one’s dead relatives who must have lived well to deserve such effort. It grew from there into a larger cultural context of spiritual places internationally.”

Navigator’s Shrine Honouring the Guidance of Pleiades and Good Fortune “While working on this idea I encountered via a Listener review, deMontalk’s poetry intrigued me. I found the information about the constellation Pleiades and wanted to place the stars in a relative position to how they appeared in the sky. In order to get the blue glass to have more of a sea look, a section of mirror went underneath.”

The roll of waves with the poetry inscribed on strips was intended to suggest the ship finding its way successfully from turmoil of sea into the shores guided by the lighthouse along the shore. 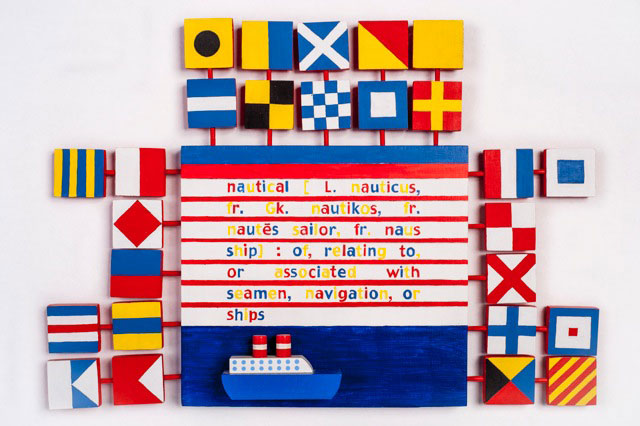 “Communication with code flags is surely now a part of history, so this wee shrine is about commemorating in a cheerful manner how symbolic signage served us in the past. I was delighted when I discovered the nautical code flags in an old dictionary,” says Susan. She created them with testpots in Resene Sapphire, Resene Guardsman Red, Resene Moon Yellow and Resene Bokara Grey.

“I have used Resene testpots for many years because of the diversity of colours and affordability to have multiple colour access. My favourite colour is Resene Guardsman Red, followed closely by Resene Kashmir Blue.”

Shrines of Essence and Remembrance and Containers can be seen in person at the Mahara Gallery in Waikanae, K?piti Coast until 21 April 2019.