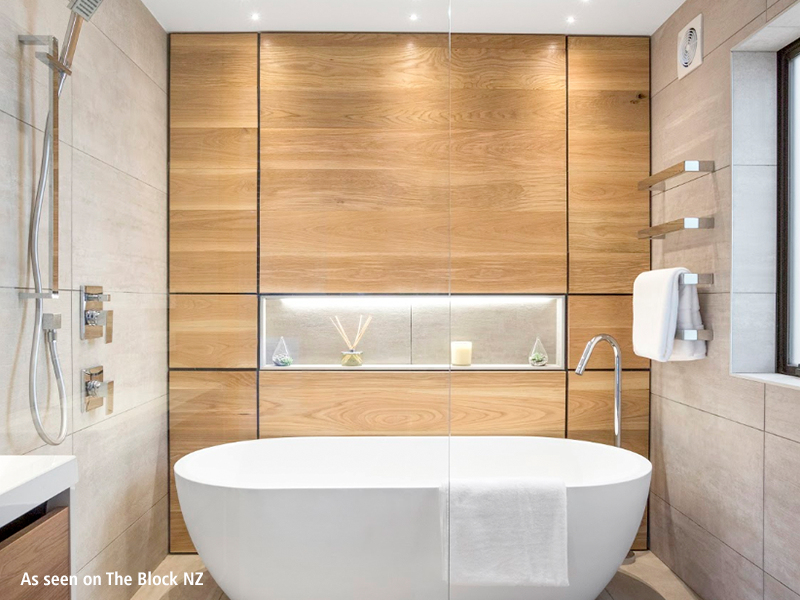 The Block NZ: Who cleaned up in bathroom week?

Much to the delight of The Block NZ teams, last week's challenge was the family bathroom, a welcomed edition. The brief called for a family bathroom that was modern, minimal with a nature feature that would add some life to the bathroom.

All four bathrooms were very different when it came to design and execution, making it a tough week for the judges. Here are the room reveals. The judges thought the brothers’ work on their bathroom was a step up from last week, but they were let down by average finishing. The light, modern bathroom has softness and warmth to it – however, looking closely, the finish lines were off, and the bathroom was left messy and dusty. Otherwise, the judges liked the choice of the stone bath, and thought the pinhole down-lighting was a great touch. They said the tiles worked well in the space as the texture contrasted nicely with the wood of the feature wall.

Get the look: Wood wall feature finished in Resene Aquaclear and ceiling painted in Resene Alabaster. Bath towels, candles and diffusers from Freedom. 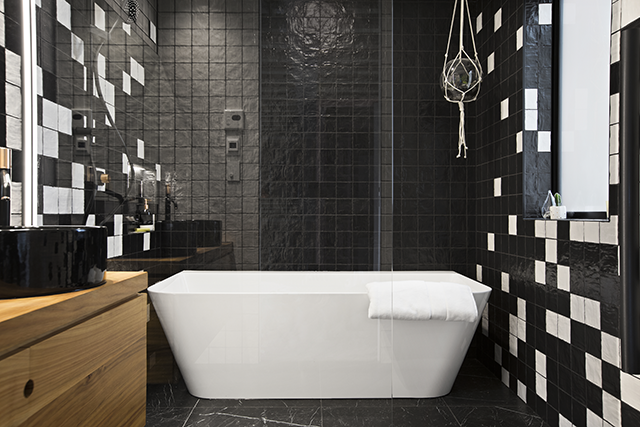 Spatially speaking, the judges thought Andy and Nate's bathroom wasn't the best setup – a nice bathtub but small shower, the timber vanity made the whole room feel a bit retro, and the shower glass was too close to the bath. The nature feature felt like it had been chucked in there as a bit of an afterthought. And although the floor tiles are beautiful, they thought the choice of wall tiles was a disaster. Overall, they said, “it just doesn't work”. Their saving grace, according to the judges, was the room's high standard of execution and immaculate finishing lines.

Get the look: The wooden vanity and benchtop were finished in Resene Aquaclear.  The trim and joinery and ceiling are all in Resene Eighth Thorndon Cream. Bath towel from Freedom. 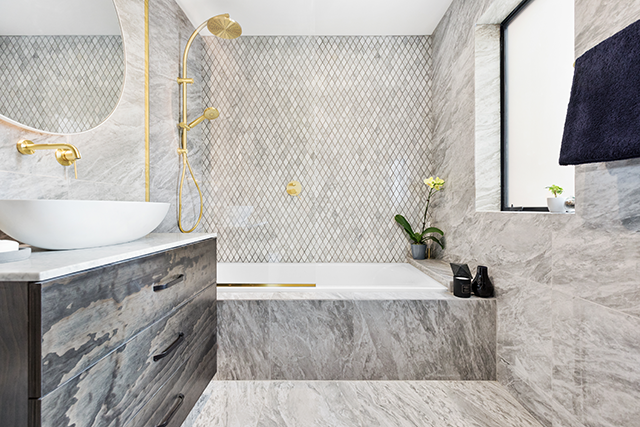 The judges' first impression of Julia and Ali's bathroom was that it felt luxurious, modern and complete. They loved the creativity of the diamond tiled featured wall and thought the twins use of materials was fantastic. They also praised the backlit mirror and the lighting under the vanity. Lighting is key in the bathroom, and they got it spot on, said the judges. Overall, “it is a beautiful, modern and luxurious bathroom which will be attractive to buyers.” However, they wished Julia and Ali had considered heated towel rails. The twins used their minus two on Stace and Yanita, crowning them this week’s winner. 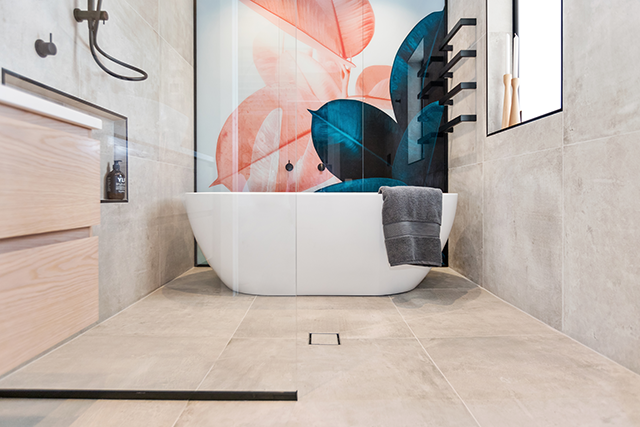 The judges said Stace and Yanita took a big risk with the artwork in their bathroom but that it really paid off – the colours were lovely and it added warmth to the room. The execution was excellent this week and it couldn't be faulted, and the design was cohesive and well-planned. It was also good to see the blue colour palette, which tied the room into the kid’s bedroom. The judges did feel, however, that the large concrete tile look is very popular and they would have liked to see something a little different. Overall, they said it was a well finished, very practical bathroom. This bathroom received the highest mark from the judges, but with Julia and Ali using their minus two, Stace and Yanita lost by 0.5 points.

Get the look: Resene Lustacryl semi-gloss waterborne enamel in Resene Half Black White is used on the joinery and trim with the ceiling in Resene SpaceCote Flat Kitchen & Bathroom in Resene Quarter Black White. Bath towel, candle holders and soap dispenser from Freedom.