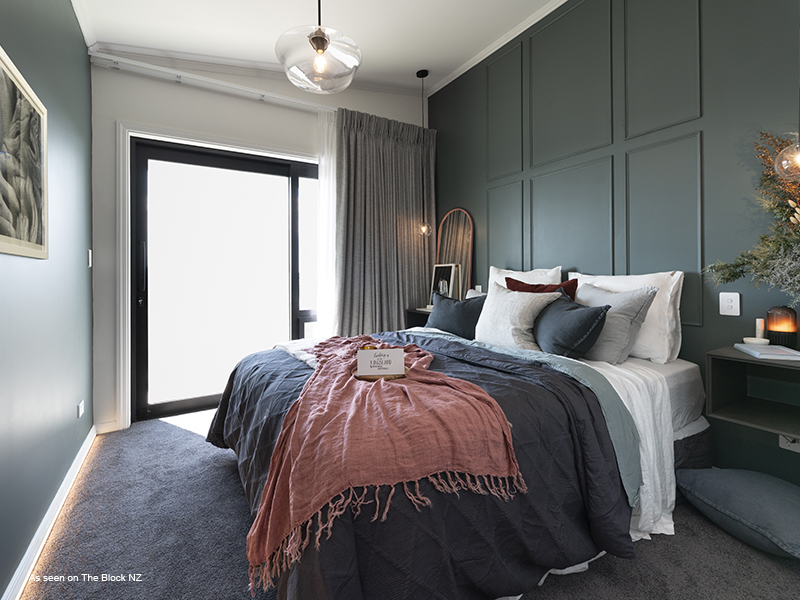 This week, we saw the first room reveal for 2019 – The Block NZ: Firehouse.

The four teams have begun tackling apartments set in a historic fire station in Kingsland, Auckland – a prime location overlooking Eden Park. It’s a special site full of heritage details and tremendous potential, so the stakes – and the judges’ expectations – are particularly high.

Interior designers Jason Bonham and Lizzi Whaley, the judges for this season, certainly had plenty to say about the teams’ first attempts at designing their guest bedrooms. 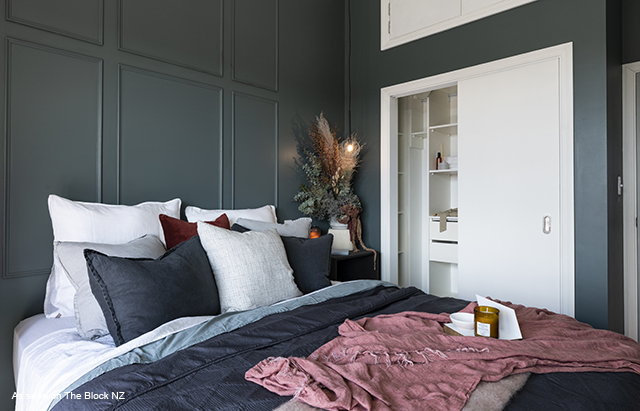 The Resene Dark Slate walls in Sophia and Mikaere’s guest bedroom won over the judges. The trim and closet doors were kept crisp in Resene White.

Sophia and Mikaere went all out with furniture and lighting in Apartment 4, the highly-desirable penthouse, and backed themselves with a radical plan for the rest of the apartment.

The judges loved the colours, especially the warm, rich Resene Dark Slate wall behind the bed, lighting and their styling though they definitely lost points for the quality of their workmanship - which was rushed - and the effort they put into the custom skirting lighting didn’t pay off.

As this week’s winners they received a whopping $7,000 towards their budget and the choice to move into any apartment they wanted. Sophia and Mikaere decided to stay put in the penthouse. 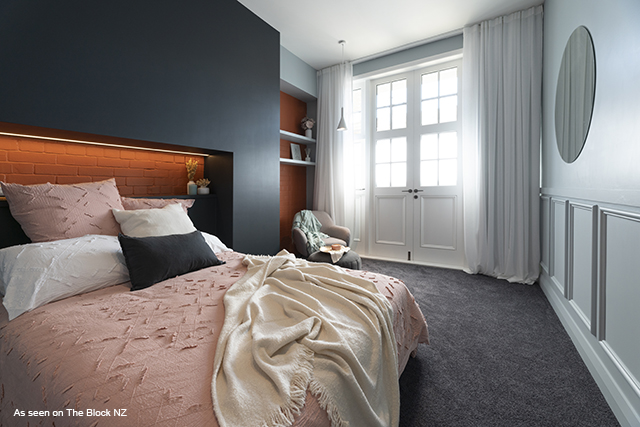 Stacy and Adam built out the wall behind the bed, painted Resene Twilight Zone, to create a recessed shelf, and teamed it with Resene Half Dusted Blue walls, Resene Quarter Bianca doors, trims and ceilings and a feature of Resene Sunbaked.

In Apartment 1, Stacy and Adam went for bold colours in hopes that they would make an impact on the judges.

Jason and Lizzi loved the drama of the high ceilings, the tall replica fire station doors. They also commented on the fact that they used lots of colour, that the light and blue dark tones complemented each other really well, however, they thought that there were too many colours with the addition of Resene Sunbaked. They also weren’t a fan of the light fixtures, artwork, texture of the bed linen or faux flowers. Jason did said that the styling was okay – which is a complement coming from him – but that it didn’t go far enough.

Overall, the judges gave Stacy and Adam high points for their high quality finishing and fixed elements in the room, such as the recessed nook for the bed and the wall detail, and said that just a few small changes could make a huge difference to the space. 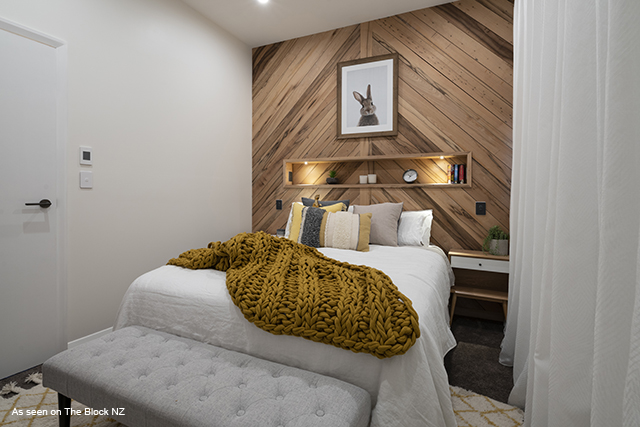 Ethan and Sam went for neutral walls in Resene Rice Cake to make their handiwork on the timber feature wall stand out.

Over in Apartment 3, best friends Ethan and Sam have tradie skills working in their favour.

Jason, while not a fan of timber, thought their wooden feature wall and recessed shelf was actually quite nice and liked the angled design. Lizzi, who is generally not a fan of feature walls, liked it too – especially for its contrast with the Resene Rice Cake walls. They thought there was a really nice feel to the space. They too, got critiqued for their throws, their choice of artwork and use of fake plants as well as their rug.

Overall, the judges said they were “pleasantly surprised” by the team’s first attempt and thought there was a real softness and restfulness to the room.

Get the look with Resene Rice Cake and Resene Half Rice Cake. 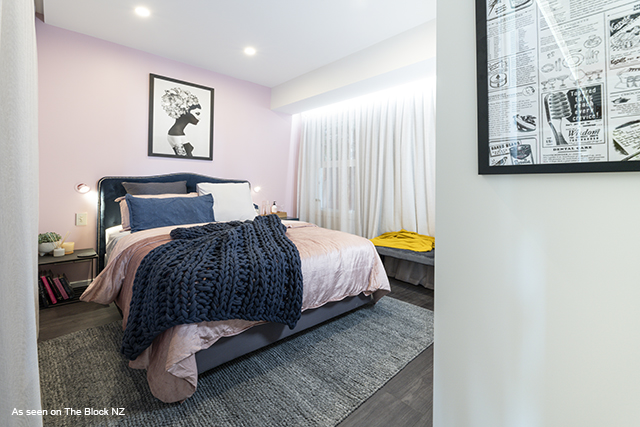 Lisa and Ribz went with Resene Gelato for most of their guest bedroom. The ceilings, bulkhead and walls surrounding the closet are in Resene Black White.

In Apartment 2, Lisa and Ribz went with a New York loft inspired design and opted for Resene Gelato from top to bottom.

Not surprisingly Jason, who is not a fan of pink, wasn’t keen on the colour. The judges thought the glass feature wall and the grey curtains were the heroes of the space, and Lizzi and Jason liked the bedside feature lights but were not fans of the throws. The headboard, teal side tables and storage space were wins.

Get the look with Resene Gelato, Resene Black White and Resene Half Black White.