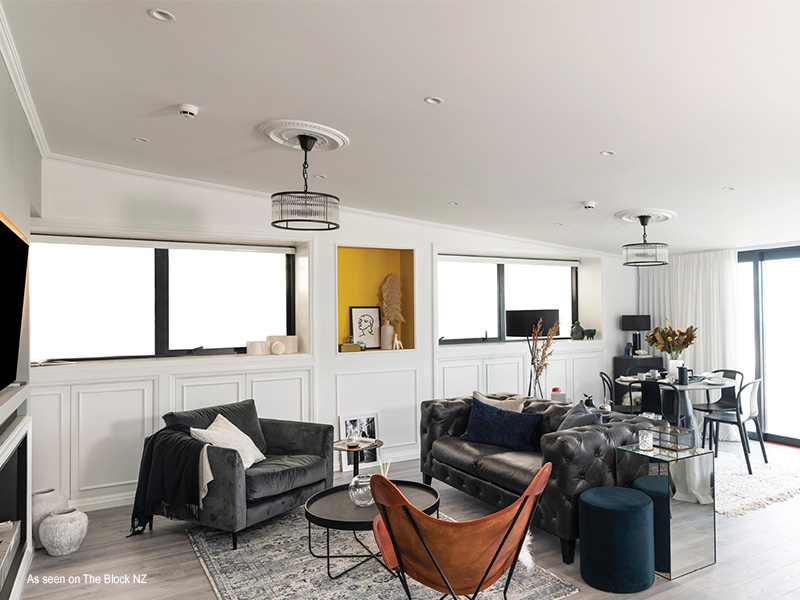 This week the teams got the chance to do over a room in their apartment. The teams were all given $10,000 to complete the space. If the space received a higher score than their original from the judges the teams could keep the 10K.

As they only get to choose one room the biggest challenge for the teams was picking the right one for a revamp.

Sophia & Mikaere decided to do over the largest room in their penthouse – the living and media room. The couple set out to turn it into a grand room worthy of a penthouse. 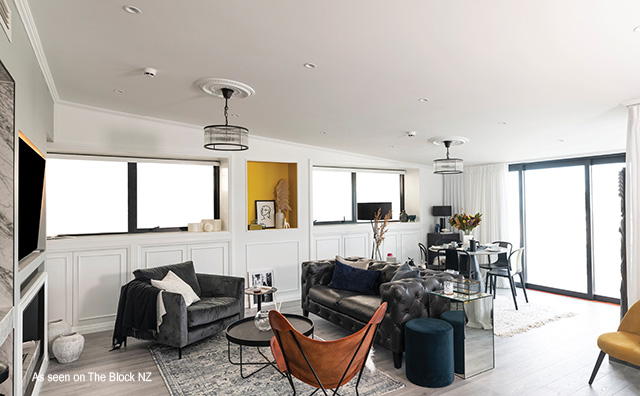 A fresh new layout and furniture turned this penthouse into a practical, luxurious area to both relax and entertain. The ceiling, walls and panelling are painted Resene White.

Stepping into the transformed room, the judges praised the couple for following their feedback and advice. They felt the new space was now a cohesive, luxurious and beautiful one with a much improved and well-coordinated layout. They commended the team for the choice to move the dining table next to the terrace doors. Jason and Lizzi loved the new addition of the marble fireplace, adding that the design of the marble tied in well with the feature tiles on the bar. Jason and Lizzi also loved how Sophia & Mikaere had taken the bar up a notch and added glass shelving that gave it a high-end feel. Sophia & Mikaere’s do over room was well executed and celebrated by the judges, who said they turned it into a space they would be happy to enjoy. The feature wall is painted in Resene Atmosphere.

Overall, the judges thought the room was nicely balanced with complementary styling elements and added that both of them would be happy to live there.

After a four-room winning streak, the pressure was on for Stacy & Adam to deliver another successful renovation. This week, the couple chose to do over their guest bedroom, which they had originally tackled in the very first week of the competition, with hope they could now turn it into a space the judges would love. The team decided to keep the structure and layout of the room the same and instead focus on improving the colour choices and styling.

The judges loved the new aesthetic, saying that the Resene Wallpaper Collection OY31610 added a soft but interesting geometric pattern, one that complemented the cool hue of the Resene Half Dusted Blue panelling. They also liked the combination of the deep and moody shade on the accent wall, Resene Twilight Zone, explaining that it added a nice contrast to the freshly painted Resene El Paso bricks and Resene Half Bianca surrounding walls. The judges thanked the team for repainting the alcove wall in Resene El Paso. They loved the Resene Twilight Zone feature wall, saying that it completed the lighter tones beautifully. The adjoining walls and ceiling are in Resene Half Bianca, while the panelled wall is in Resene Half Dusted Blue.

The new pendant light fittings were a great choice, offering a dynamic and scale that works well with the room. Jason and Lizzi also admired the new artwork on the wall and said that it offered perfect continuity from the gridded art used in the hallway. The frames are painted Resene Quarter Bianca to tie them into the space.

Overall, the team were said to have exceeded expectations yet again and have come a long way since the first week of the competition.

In Apartment 2, Lisa & Ribz decided to do over their entrance, hallway and laundry. The front entrance was overhauled, the paint covered and wallpapered in Resene Wallpaper Collection 200241, offering deep jewel tones, pattern and texture. The judges felt that it was an improvement on their previous concept as it tied much better into the colour palette in the main living spaces. They also loved the addition of a smoky mirror and thought that it made the space feel bigger and had nice connectivity to the backsplash in the kitchen. 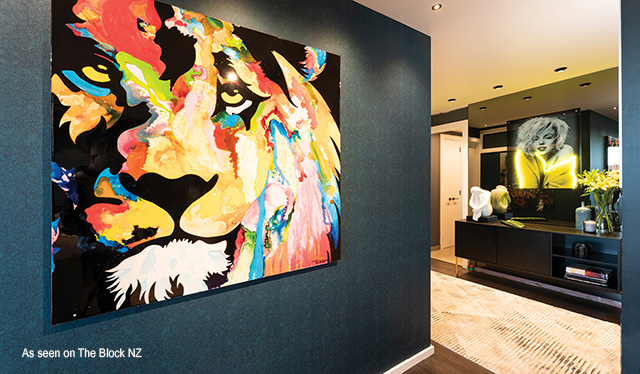 Lisa & Ribz chose to redecorate their bold golden hued wall and paper it instead in Resene Wallpaper Collection 200241. The ceiling is painted in Resene Black White.

Deeper into the hallway, the Resene Solid Gold FX metallic paint has also been replaced by the Resene Wallpaper Collection 200241. Jason and Lizzi commended the team on this. The smoky mirror behind the Marilyn Monroe print was also a hit with the judges. 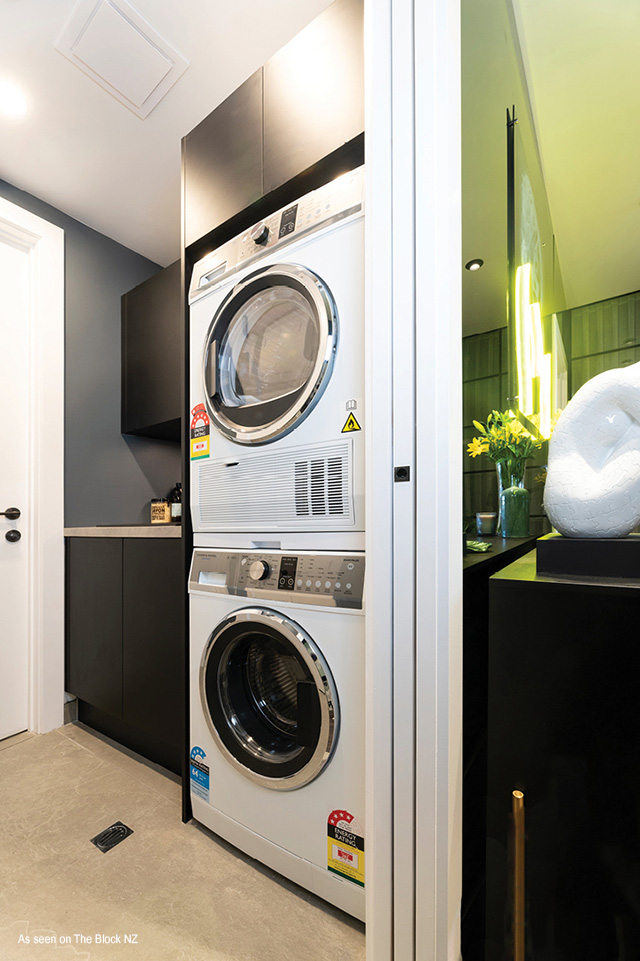 When it came to the laundry, Lisa & Ribz repainted the walls in Resene Half New Denim Blue. The ceiling, doors and trims are in Resene Black White.

Through to the laundry room, Lisa & Ribz have repainted the walls in Resene Half New Denim Blue. Although Jason said he would have preferred they focus their time on improvements to their living room, he liked the new choice of colour.

Overall, Jason and Lizzi felt that the re-do established a more cohesive space, giving a better indication of what buyers can expect to find in the rest of the apartment.

After the judges deemed their children’s room ‘a hazard’ in week two, Ethan & Sam decided it would be the ideal room to focus their redecoration efforts. Out went the fireman’s pole, bunkbeds and ‘loft’ mezzanine.

For their new aesthetic, the boys chose a look inspired by childhood comics. Upon entering the room, the judges said the decision to remove the bunks created enhanced space, making it feel like a different room. They commended the duo on replacing the dangerous mezzanine with practical storage. 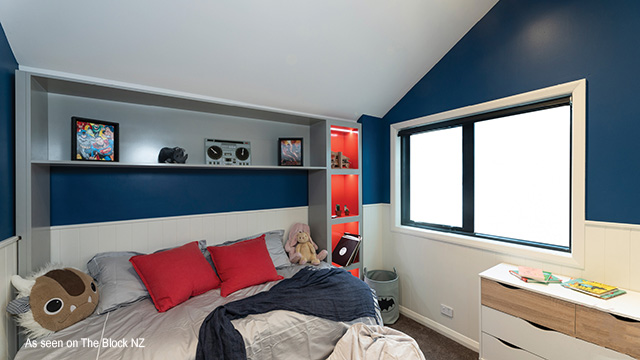 Ethan & Sam removed the bunkbeds to open up space in their kids’ bedroom. Inspired by childhood comics, they opted for Resene Cobalt as a feature shade, complementing it with light and fresh Resene Half Black White. The insides of the recessed cubbies are painted Resene Guardsman Red.

Ethan & Sam chose to remove their poorly installed wallpaper, replacing it with painted walls in bold primary colours. Both judges felt the end result was now a more improved children’s room, one with cute and age-appropriate soft toys and accessories, and that the blinds also worked cohesively with the new elements in the room.