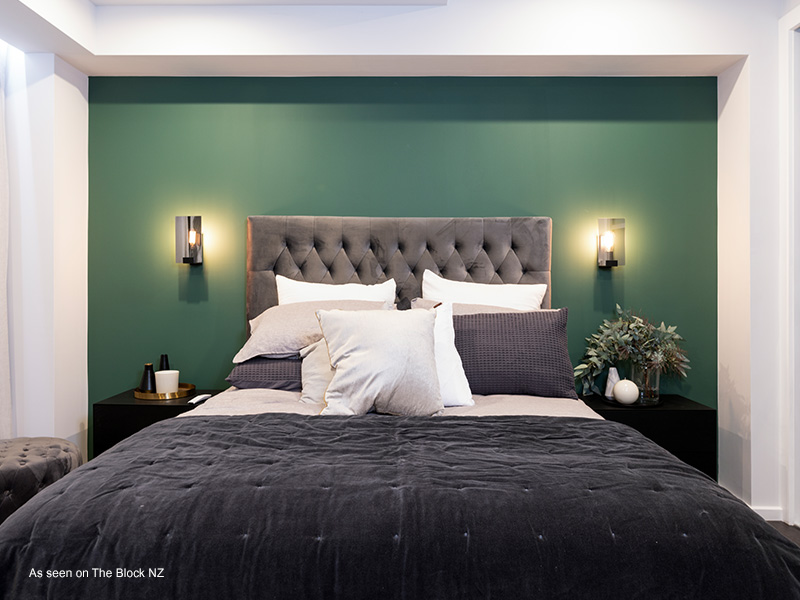 This week on The Block NZ the teams created four beautiful master bedrooms and ensuites that we would be more than happy to come home to. 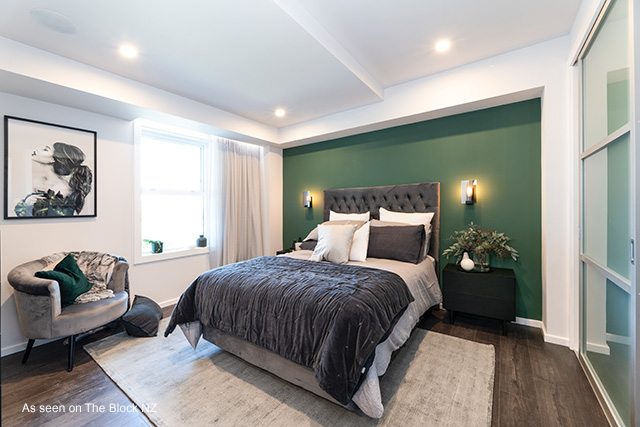 Resene Mother Nature defines the recessed feature wall in Lisa and Ribz’s master bedroom, which was cleverly activated with Resene SmartTouch conductive paint to turn the wall into a light switch. The surrounding walls are painted Resene Half Concrete and the trims are in Resene White.

It was a refreshing change for Lisa & Ribz to hear some positive feedback after putting plenty of hard work into their master bedroom and ensuite in Apartment 2.

The judges called it a clean, fresh and modern bedroom – and a real improvement from their previous rooms. Lisa & Ribz were complimented on their choice of bedside wall sconces and that the Resene SmartTouch conductive paint that allows the wall to be used to turn the lights on and off. Despite not liking feature walls, Lizzi and Jason liked the choice of Resene Mother Nature behind the bed as well as the glass wardrobe doors. 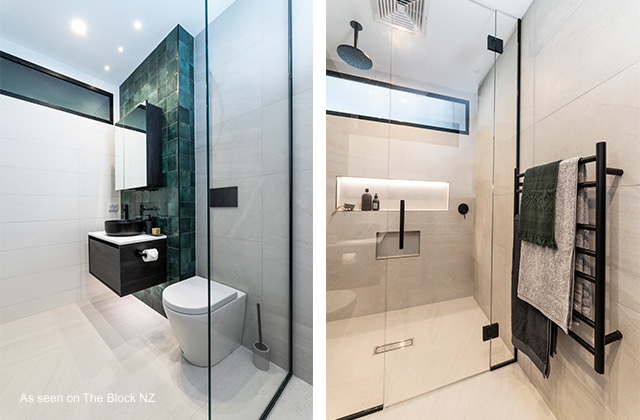 Lisa & Ribz chose Resene White for the ceiling to complement the green, black and white colour scheme in their ensuite bathroom.

In the ensuite, both judges thought the result was clean and really well-finished. They liked the under-vanity lighting and the high window, which borrows light from the main living space, and the use of the tile they were given – though Lizzi would have liked to see a bit more of it.

Lisa & Ribz’s efforts were enough to secure them the win for this week – and the $10,000 prize 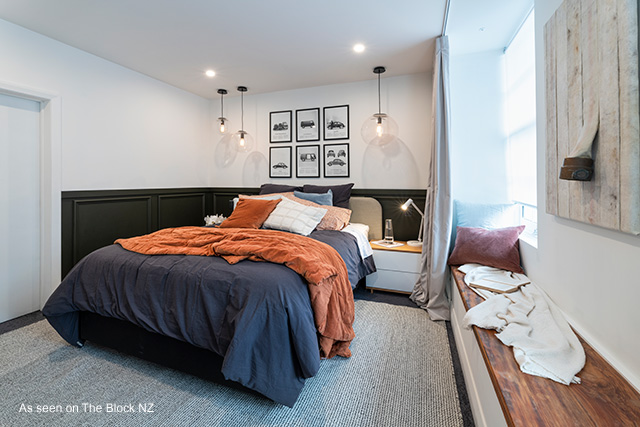 Stacy & Adam chose to ground the walls of their master bedroom with wood panelling in dark and moody Resene El Paso, which impressed the judges. The rest of the walls, trims and ceiling are painted Resene Quarter Bianca.

In Apartment 1, Jason and Lizzi loved Stacy & Adam’s choice of Resene El Paso for the wooden wall panelling, both for its dark green hue and the contrast it created. They also thought the space was nicely styled and had a light and bright feel. Compliments were paid for the window seat, which they thought was a great addition to the room, as well as the fire hose art piece – a neat and surprising feature. When it came to the ensuite, the judges thought the terrazzo tiles used on the floors and the terracotta ones used on the walls would have looked better had they been swapped.

Overall, Jason and Lizzi thought the master bedroom was really well done but that the ensuite was a bit predictable and had been finished poorly – which was ultimately reflected in their scores. 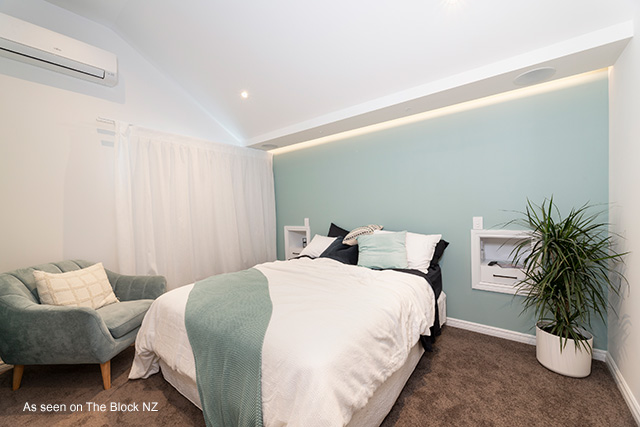 Ethan and Sam went with a feature wall in Resene Ashanti and painted the rest of the walls, ceiling and trims in Resene Half Black White.

Over in Apartment 3, the judges were quick to point out that the recessed nightstands that Ethan & Sam built into their master bedroom were too far away from the bed to be practical and that the colour theme within the room was too matchy-matchy – comparing the look to a child’s paint-by-number.

The feature wall was painted in Resene Ashanti teamed with Resene Half Black White. 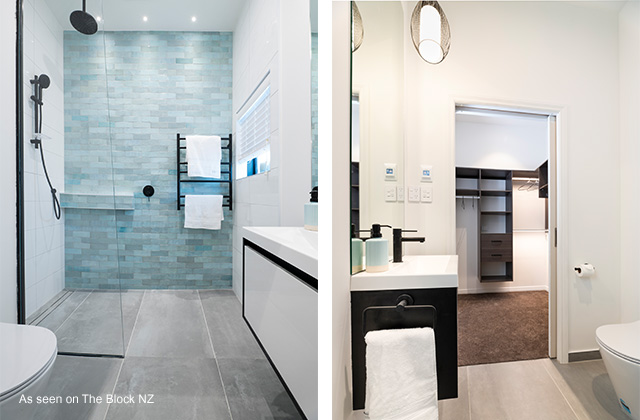 Ethan and Sam carried Resene Half Black White, the main colour used in the master bedroom, on to the walls and ceiling of their ensuite bathroom. 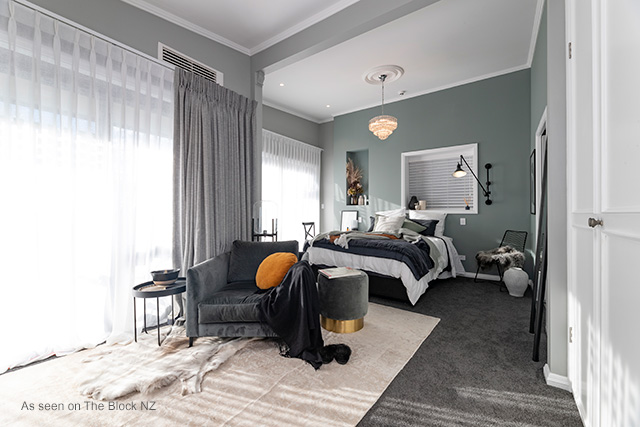 After choosing to tear down a wall to eliminate their guest bedroom to increase the floor space, Sophia & Mikaere transformed the master bedroom area in Apartment 4 into a massive suite. While the extra floorspace allowed for a separate spot to read and relax within the room, because of the time it took them to work on such a large area, the couple didn’t have enough time to finish off some of the basics, like painting.

The judges thought the artworks and colours, using Resene Atmosphere, Resene Inside Back and Resene White, were quite nice but that the room was over-styled. While they liked what the couple were trying to achieve, they felt that they had maybe gone a bit too far. In Sophia & Mikaere’s ensuite, the ceiling was painted Resene White to match with the bright white sink and vanity.

The judges’ impression of the ensuite was that the space was really nicely pulled together. The loved the tile choices – especially the use of the geometric patterned tile on the feature wall – and thought that the mirror was a good size and fit the room well. Jason called it “a fantastic ensuite that had a nice continuity with the master bedroom.”

When it came down to judging, there was some drama as to whether or not the couple had continued styling after tools down was called.  Despite promises not to do so again, they were disqualified from scoring in this round.