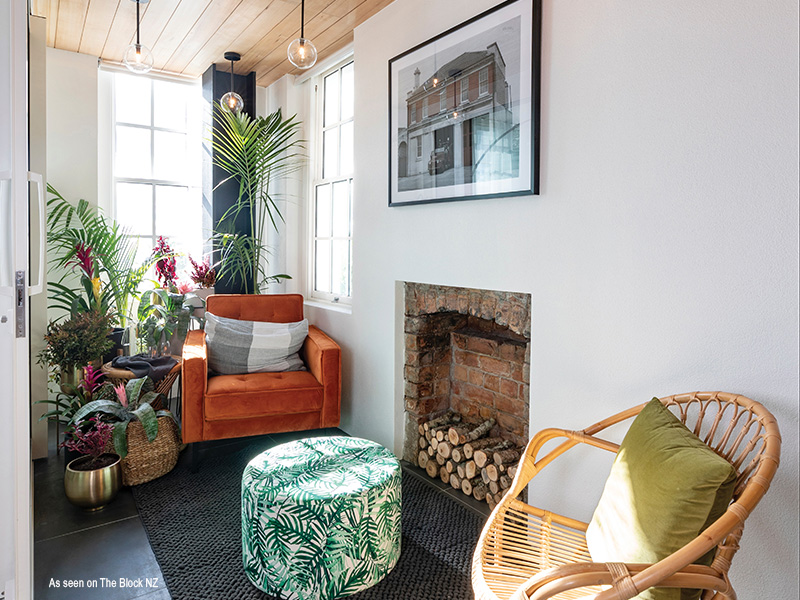 With the finish line in sight, this week the teams were challenged with the renovation of the apartment's final space final space: the outdoor terrace. There was added pressure to ensure that they created a space suitable for both entertaining and relaxing.

Apartment 1 has a unique winter garden offering a great point of difference that will set it apart for potential buyers. Upon first impression, the judges felt that the team had once again created another delightful space, one that was well finished, with a great layout and perfect use of colour. The walls of Stacy & Adam’s terrace were painted in warm and fresh Resene Half Bianca. . It’s an ideal shade for reflecting natural light from the windows back into the room and its neutrality allowed the team to bring in a number of accent colours through the furniture, plant life and upholstery.

The team was lucky to have an original heritage fireplace included in the room. They were advised against turning it back into a working fireplace and decided to instead, restore it into a decorative statement feature.

Stacy & Adam chose a bright orange armchair to define the space, but the judges thought that the cluster of plant life next to it appeared a little ‘hoarderish’ – though, overall, the choice created height, layering and a pop of colour to the space.

Lizzi and Jason complimented the team on a beautiful space with an abundance of character that would be a great selling point for potential buyers. They felt that over the course of the series, Apartment 1 had come together beautifully.

After a successful do-over week, the pressure was on for Sophia & Mikaere to transform the two large terraces belonging to the penthouse suite in Apartment 4. As the outdoor space with the largest surface area, the challenge was to style it in order to complement the spectacular wrap-around views. For the northern terrace, Jason & Lizzi liked the couple’s choice of non-slip tile which they said offered a perfect contrast to the dark matte finish of the cladding.

On the southern terrace, the judges were blown away by the elevated views of Mount Eden. Both Jason and Lizzi felt that it was a lovely space with great outdoor entertaining options and a good-sized custom-made dining table. The judges also thought that Sophia & Mikaere could have added more plant life to enhance the greenery in the space. Overall, they complimented the team on their well put together terraces with great continuity.

In Apartment 2, Lisa & Ribz decided their outdoor terrace would take shape as a luxurious space with room to entertain. For the flooring, they chose contemporary grey tiling, which Lizzi and Jason felt was a great pick. On top, they placed a grand planter box that housed a variety of greenery. The judges felt that the exterior colour palette made it feel like an extension of the living room, which earned them some points. Lisa & Ribz wanted their outdoor space to be ideal for entertaining. The judges complimented their well-accessorised and styled covered terrace that could be used all year-round.

As a terrace that was sheltered from the elements, Lisa & Ribz were able to include a greater variety of fabrics. Though Jason mentioned he would have liked to have seen a pair of chairs and a table as opposed to one, bringing furniture and soft furnishings outside was a move that created a cohesive indoor/outdoor flow. The judges both felt that the terrace was well accessorised and would ensure a nicely styled and usable space year-round.

Stepping onto the terrace, the judges felt that the tiling was a good choice, offering a nice contrast against the lighter grey tiles in the middle. They loved the added seating area that Ethan & Sam had handcrafted and complemented the continuation of pattern seen in the soft furnishings throughout the apartment. Ethan & Sam chose soft, neutral tiles for their terrace that offered a nice contrast to the dark exterior cladding of the building.

Lizzi & Jason also felt that the furniture they’d chosen looked a little too rustic for the industrial-chic vibe of the space. They added that the terrace would benefit from larger planters and greenery to introduce additional life to the area. But overall, they felt that with such a fantastic view out onto Eden Park and beyond, the space would be really sellable.