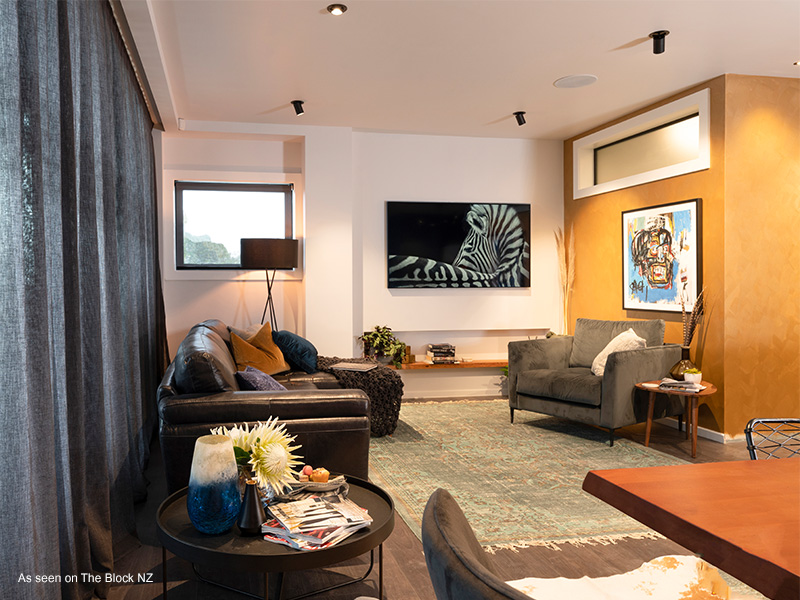 This week, the teams were asked to create two beautiful and functional spaces: the living and media room. There was also an extra point up for grabs for the team that made best use of fabric provided by another team, in their space.

After a kitchen that was described by the judges as ‘the best room they have done’, Lisa & Ribz were feeling confident and set out to create a sexy-yet-stylish living area in Apartment 2.

While Lisa wanted to create a striking feature wall in the living room, both Jason and Lizzi thought the Resene FX Metallic Solid Gold feature wall clashed with the beautiful Resene Blumine wall in the kitchen. Both judges did, however, love the repurposed wooden timber shelf and thought it was well finished and integrated perfectly within the room. They commented that the layout was functional but that it also would benefit from a little tweaking here and there for the room to meet its full potential. Lisa & Ribz decided to turn their special challenge fabric into art, which Jason and Lizzi both thought was creative. 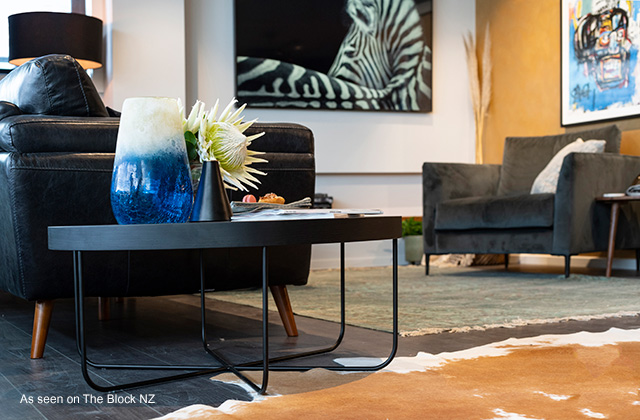 Jason and Lizzi thought Lisa & Ribz’s room was finished to a high standard with a functional layout. The feature wall is in Resene FX Metallic Solid Gold paint, the adjoining wall is in Resene Half Concrete, while the trims are in Resene Black White.

Overall, the judges said that the room was finished to a high standard and was a big improvement from the first few weeks of the competition.

Thanks to plenty of hard work, Ethan & Sam received rave reviews from the judges this week. Although budget issues challenged the team this week, the judges felt their finished living room showed just how much they have learned throughout the course of the competition. Jason and Lizzi were pleased that Ethan & Sam had taken their advice on board and painted over the existing wall, adding that the new hue, ?Resene Evolution, offers warmth, atmosphere and offered a good depth of colour that works well with the rest of the room. 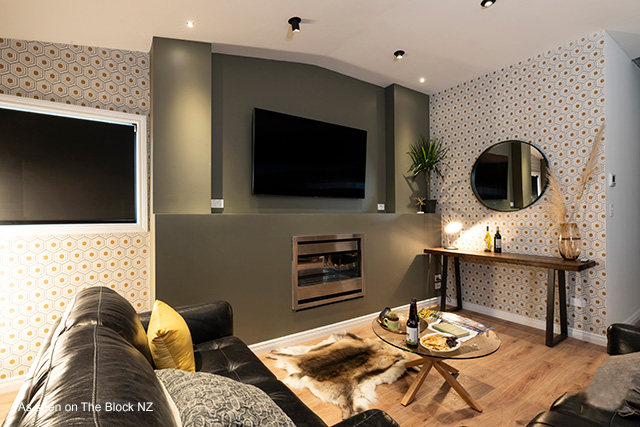 Ethan & Sam enjoyed stellar feedback from the judges this week, who felt their living room demonstrated their growth so far. The feature wall behind the TV is painted Resene Evolution while the adjoining walls are in Resene Wallpaper Collection 35899-1. The ceiling and trims are in Resene Half Black White.

When it came to their choice of using Resene Wallpaper Collection 35899-1 married up against the built in TV unit, the judges felt that it added interest to the room, worked cohesively with the Resene Evolution wall behind the TV and connected well with the kitchen. The chain mail sheer curtain over the windows complemented the space and Jason and Lizzi called it both ‘fabulous’ and ‘unexpected’.

Both judges felt that Ethan & Sam had come on in leaps and bounds and are turning Apartment 3 into a lovely living space.

For the sake of continuity, Stacy & Adam chose to run the eye-catching graphic Resene Wallpaper Collection 25910 used in the kitchen throughout the length of the living room. The judges said that while it was a bold move that may not appeal to some people, it looked fantastic and created a nice contrast with the rest of the space. Jason and Lizzi also complemented the team on their choice of fireplace and, combined with the colour palette, thought that it brought a cosy, warm and luxurious feel to their living room. 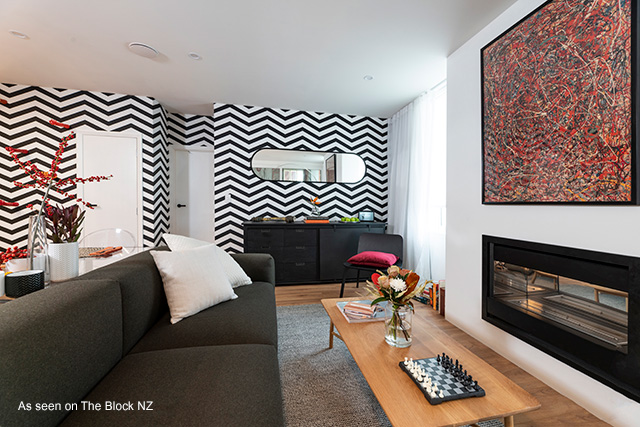 Stacy & Adam created a warm and graphic living room with the focus on the fireplace that the judges said was ‘amazing’. The couple decided to continue running the striking Resene Wallpaper Collection 25910 along the far side of the room and painted the adjoining wall in Resene Quarter Bianca. They complemented the space with a warm, artistic print.

For their separate media room, Stacy & Adam created a space reminiscent of a 1950s movie theatre. The LED lighting – though Jason thought it to be a little harsh for such a small space – added a creative touch to the overall movie effect. Both judges loved the quality of finish on the room, describing it as immaculate and well done. Stacy & Adam took away this weeks rom reveal with a final score of 17. 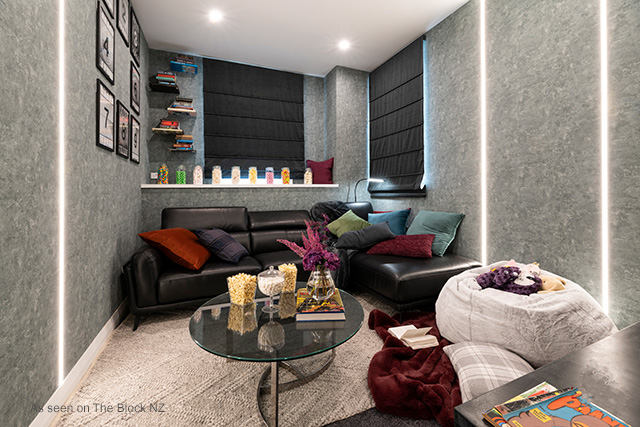 Wallpaper Collection Z44534 is used on the walls and Resene Quarter Bianca on the ceiling and skirting boards in Stacy & Adams media room.

After creating a light and bright kitchen last week, Sophia & Mikaere set themselves the task of turning their living room into a space fit for a penthouse suite. Opting for a Georgian style with grand features and a dark colour palette, the biggest challenge for the duo following the previous weeks’ comments was to achieve a perfect finish. 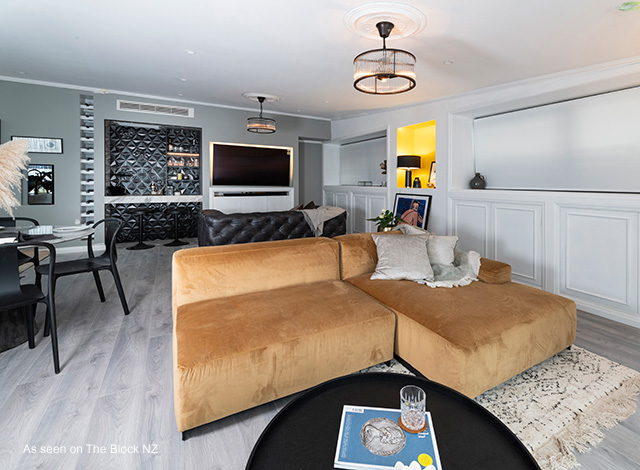 Sophia &Mikaere wanted to transform this section of their spacious apartment into a sophisticated, Georgian living area. The judges loved the myriad of textures displayed and thought the warm tones of the sofa complemented the neutral colour palette. Above the panelling, the walls have been papered in Resene Paintables Wallpaper Collection 48929. The main walls, panelling and ceiling are painted Resene White, the far wall is in Resene Atmosphere and the alcove is painted Resene Hive.

The couple received a mixed reaction from the judges. Jason and Lizzi thought the panelling detail that ran throughout the space was a beautiful idea. The furniture colour and texture warmed up the room and worked well with the soft furnishings, but the layout was a little confused. The judges liked the use of Resene Hive for pop of colour but felt that the ceiling roses and chandeliers – which connected well with the master bedroom and added an air of sophistication – would benefit from another lick of paint. They believed with a little more time to touch up and re-plan the space, it could be a beautiful room.