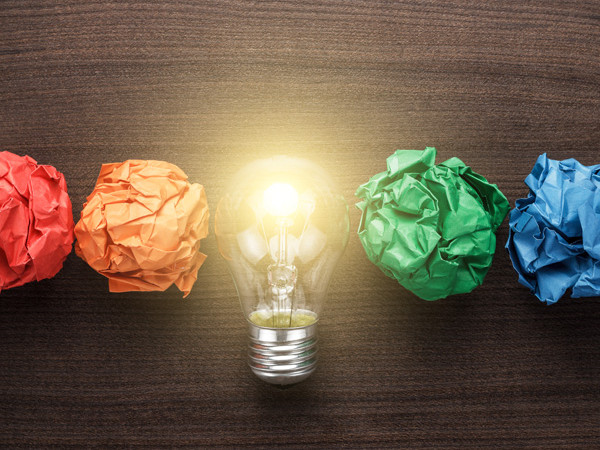 Have you ever wondered why your stunning new dress or shirt suddenly adopts an off-putting muddy hue when you try it on in front of your bedroom mirror? Or why the red wall in your lounge looks burnt orange at night?

And why your Resene ColorShop staff will advise you to paint your testpot of colour onto a piece of card or firm paper and move it about the room you intend to paint so that you can see it under different lights. Also, to view your sample at night under artificial light as well as during the day.

To understand the intricacies of colour, the first thing to remember is that we can only see different shades if they are illuminated. In order for them to be anything other than degrees of black and white, light has to hit the surface and be reflected back.

The brightness of that light is measured in units called lumens – the more lumens, the brighter the light. One lumen is equivalent to one lux, which is the brightness of four full moons. Humans need a quarter of a lux to be able to see at all.

So, when are the colours we see ‘real’ and when are they not? In an ideal scenario, ‘true colour’ is the shade closest to that reflected directly by the sun, which contains the full spectrum of the rainbow. We can achieve this by using as much natural light as possible in our homes. In this country, where we are blessed with lots of natural light, we do just that: so many modern homes have plentiful large windows and skylights.

Having said that, there are numerous artificial light sources available to us today. These are used to compensate for lack of natural light or to achieve deliberate colour effects. As a general rule of thumb, warm light (pink, red, yellow…) accentuates warm colours, while cold tones (blues, greens, white, grey…) enhance colder tones. It all depends on which light is right for your purpose.

F stands for function. What do you want to achieve with the light? Do you want to bring out the best in the colours of your interiors and sofa cushions? Do you want to light up an entire sports field? Does the light have to be practical, for example, in a study?

A for ambience. Perhaps you want to create a relaxed mood in a casual living area. Cool, blue light will enhance an indoor pool, while warm pinks will set the scene in your meditation room.

C for comfort. Do you see a glare? Does the light feel too hot?

E for economy. In other words, what is the most affordable lighting solution for your needs?

Incandescent light, which Thomas Edison invented around 1879, is where an electrical current heats a thin filament in the bulb, and so produces light. Halogen lights are a type of incandescent but have a more directed light so are better for task lighting.

Pros: Incandescent light bulbs have perfect colour rendering, are cheap to produce and work well on alternating or directing a current. They are commonly used in households, commercial set-ups, portable lighting, for decorative purposes and in advertising lighting.

Cons: Incandescent lighting is hideously expensive as a lot of power is required to produce the energy – one light bulb only lasts roughly 1000 hours. The heat it generates makes them too hot to touch, and so they are dangerous in certain situations.

Incandescent light bulbs are gradually being replaced in many applications by sources that produce more light but use less electricity, such as fluorescent lighting …

Fluorescent lighting uses electricity generated through gas discharge – in a nutshell, a tiny amount of mercury in a phosphor-lined glass tube emits ultraviolet (UV) light. The phosphor absorbs the UV light and re-emits it as light the human eye can see.

Pros: Compact fluorescent lamps are super energy efficient – they produce a quarter of the heat per lumen of an incandescent light bulb and last about six times longer (about 6000 hours).

Cons: To the conventional eye, fluorescents sometimes seem too bright and appear to make colours look unnatural and garish. To combat this, opt for the yellow-tubed fluorescents (such as ‘warm white’) instead of pure white ones, or an extremely low-wattage lamp. Also, fluorescent light cannot be used in dimmers.

CFLs (compact fluorescent lamps) are the much-promoted ‘eco-bulbs’ because of their superb energy efficiency. They are great for most general household use, and can directly replace standard incandescent bulbs. They can in the usual spiral shape which gives a more even distribution of light, or in a stick format.

Cons: CFLs can take a couple of minutes to warm up to full brightness. They are more expensive than standard bulbs, and some can’t be dimmed or used in recessed downlight fittings. Because they contain a small amount of mercury, care is needed when handling them and when disposing of them.

Cons: You can’t yet buy an LED replacement bulb that’s as bright as a 100W standard incandescent bulb. Not all LEDs can be dimmed. They don’t like heat so operate best when installed in a fitting that allows air circulation.

When light tricks our sight

Most of us will have experienced the navy sock/black sock scenario. You take a pair of apparently black socks out of the drawer, then realise later that one of them is actually blue. Don’t worry, it doesn’t mean you’re colour blind – it’s a common phenomenon called sample metamerism.

The reason for the optical illusion is that the wavelength emission between various light sources, such as incandescent and fluorescent light, differs. Incandescent light bulbs emit very few short blue wavelengths, which makes it hard to tell whether a colour we see in such light is dark blue or black. Fluorescent light, on the other hand, emits more short-wavelength light, and so it’s easier to distinguish the two colours.

On the flipside, you can also have two identical colour samples that look vastly different when viewed under different lights. This phenomenon, called illuminant metamerism, explains how retailers (or home owners) can use light to present their product (or your interiors) in the most flattering light.

There are various other ‘metamerisms’. One is observer metamerism – the fact that individuals perceive colour slightly differently. Another is geometric metamerism – the different appearance of colours when seen from different angles, distances and light positions. Did you know that one reason men and women often see colour differently is that the distance between a woman's eyes is usually slightly less than a man’s?

Metamerism also affects the way we view paint colour charts, which is why Resene uses actual Resene Environmental Choice approved paint on colour charts, such as The Range fandeck series so that the paint chip matches the paint on the wall.  The gloss level can also throw off your colour perception – flatter finishes make a colour look darker and muddier; a glossier finish makes it seem brighter and cleaner.  See the Resene gloss level fandeck at your Resene ColorShop to see the effect gloss label has on paint colours.

Whatever your gender or domestic lighting arrangements, colour perception will always be a very personal thing – time to rethink the dress and the red wall, perhaps.

Wherever possible, it is best to develop a lighting plan at the same time as your paint scheme. For example, if you decide to paint any of the rooms in a dark colour, you are likely to need more lighting than if your walls were pale and would therefore reflect the light.

Have you ever wondered why your stunning new dress or... more