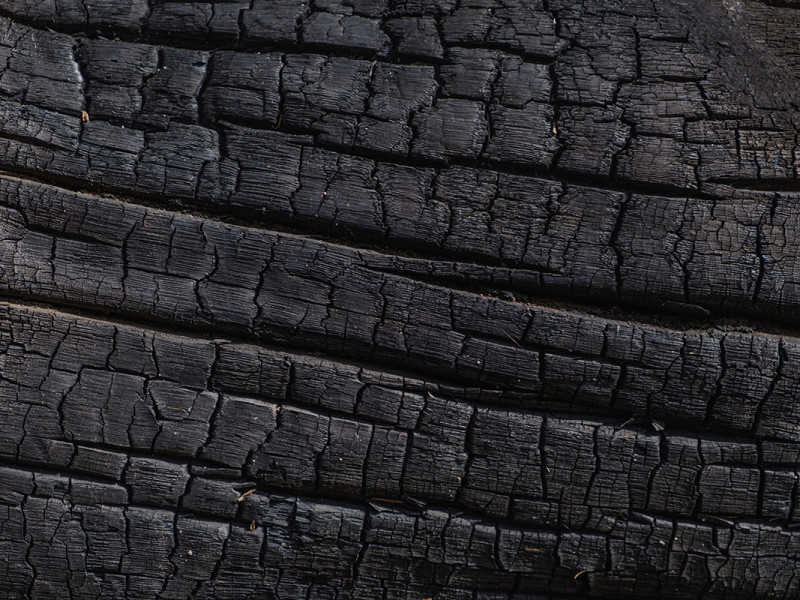 Historically, black has always been a popular (non) colour in New Zealand, but the current popularity of it as a house cladding finish is truly meteoric. While the availability of modern infra-red reflecting dark pigments may have under-pinned some of this popularity, it seems as if the trend was coming anyway! And the finished product certainly looks sharp!

We have been approached recently by a few customers looking for a recommendation for a consolidating coating for 'charred timber'. Shades of memo 158! Charred timber appears to be a fashion on top of a fashion.

Charred timber has a history in Japan in which Sugi (also known as Japanese Cedar) is burnt in a traditional manner to give a charred surface which can be varied for depth and texture. The aim is to produce a char which is rich in carbon black which in turn will provide a protective and decorative surface to the timber.

The by-products from burning timber have been used from pre-historic times to produce black pigments from two simultaneous but very different routes. The first route was to use partially burnt-char which could be scraped off the 'dead' coals (charcoal) after the fire went out. This charcoal could then be ground to a fine powder which was used as the pigment.

The second route was by recovering the soot which could collect on nearby, cooler surfaces. Soot is formed from the smoke generated by the incomplete burning of the volatile components of the wood. Unlike charcoal, soot, which has an inherently fine particle size, needed little grinding and gave a more intense colour.

It is interesting to look at where this technology sits today. The carbon black pigment industry, which is based exactly on the same principles of incomplete burning and condensation of volatile hydro-carbon oils and gases is currently worth about US $17.5 billion per annum.

There are different methods of doing this, each with a very high degree of sophistication and reproducibility, producing a range of precise particle sizes which controls tint strength and undertone. The carbon black industry was producing true nano particles well before 'nano' became 'flavour of the month'.

Further, the particles can be controlled to have more or less oxygenated species on the surface which can provide very hydrophobic particles with increasing hydrophilicity as the polar oxygen increases. Pigments produced from different starting fuel (normally oils or gases) and the manufacturing processes used show their own idiosyncrasies.

Crucial to the production of these valuable pigments is the strict control of the amount of air used for the combustion and the precise cooling programme used.

The other half of our caveman's fire, the serendipitous production of charcoal has developed into a massive industry being, at once, a sophisticated industry serving the first world as well as being probably the world's biggest 'cottage' industry serving many of the poorer countries.

Charcoal is valuable as a fuel as a fire fuelled by charcoal burns at a much higher temperature than a wood fire. Charcoal reaches a temperature of 1,100°C which is usefully under the melting point of iron but a temperature at which iron becomes very malleable – it became the fuel of choice for blacksmiths! Charcoal also burns with a clean flame, without smoke or smell. Charcoal production was a significant cause of deforestation in earlier times!

The principal of charcoal production was to burn wood in such a manner as to remove the volatile species from the timber, using the heat generated from this initial step to remove the elements of water from the basic carbohydrates in the timber (cellulose and wood sugars) to leave pure carbon. This process can take several days.

Charcoal is burnt in kilns which are relatively sophisticated in the West but can be very simple pits or stacks, a chimney formed from stacked logs and a covering of turf or moistened clay in poorer countries. Whatever the type of kiln used, the critical factor in producing good quality, consistent charcoal is the control of the amount of air allowed into the kiln at all stages of the process. A collier was a skilled tradesperson!

The average yield of charcoal was 60% of the original wood by volume or 25% by weight so it is quite a lightweight material. Typically, charcoal is friable although some types can be very hard. Bincho-tan is a Japanese charcoal made from hardwood via a very complex burning and cooling regime which is so hard that it has a metallic ring when struck!

Carbon is inherently resistant to UV, water and heat but the inherent properties are dominated by its physical form – a pile of soot, a piece of graphite, a block of charcoal and a diamond have little in common excepting the fact that they are all carbon!

Which brings us back to Shou Sugi Ban!

I know that I am treading on a few corns here (and do bear in mind that these are my opinions alone) but, having looked at several YouTube videos on how this material is being produced, I cannot, for the life of me, see how a uniform, adherent material can be created without any of the crucial control of the air supply. A soft structure and a remaining percentage of watery wood tars seem inevitable.

Consolidation with, for example, a drying oil seems impractical given the porosity and volume of the char layer. The irreversible stamp that is put upon the timber by charring to achieve an effect which, from one metre away, can be achieved with a good wood stain seems an additional high price to pay. The wood stain can also be refinished when fashion changes.

My strong recommendation to my company is to stay right out of this segment of the market. The only advice that I will proffer is that, should an area of your charred timber house be damaged, please don't be tempted to touch it up with a blowlamp!